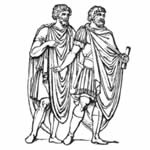 The abolla was a thick, double cloak. Differing from the toga in that it was, at least originally, used only as a military garment. By imperial times, it was worn indiscriminately. In Suetonius’ Lives of the Twelve Caesars, Ptolemy of Mauretania offended Caligula by the splendour of his purpurea (purple) abolla. For rich and fashionable wearers, the original military form was undoubtably altered, and its rough texture exchanged for fine linen. Philosophers also adopted the abolla and retained or even exaggerated it simple coarseness. The included image, a drawing derived from a bas-relief on the Arch of Septimius Severus is an example of the abolla as worn by soldiers. 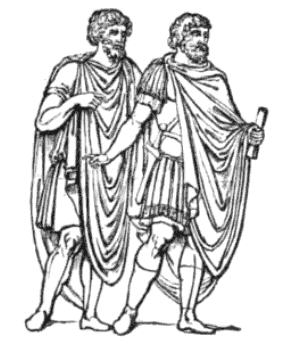