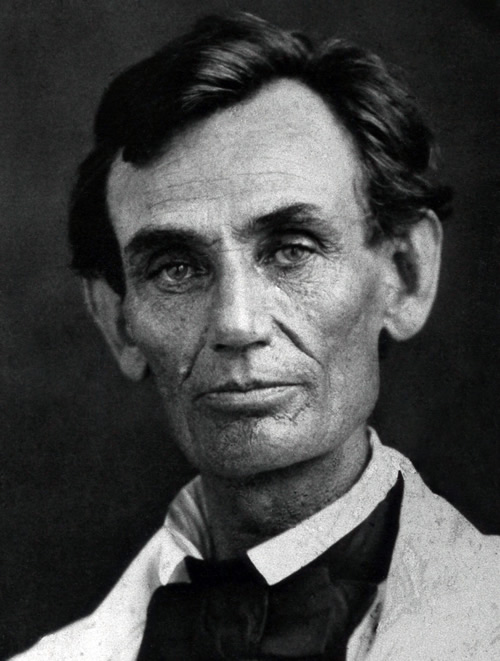 Abraham Lincoln delivered his ‘House Divided speech, one of the best known of his career, on June 16, 1858 in the Illinois State Capitol in Springfield. He had won the Republican Party’s nomination as Illinois’ US Senator. He was unsuccessful in his campaign for the seat which was held by Stephen A. Douglas, a campaign memorable for the Lincoln-Douglas debates of 1858.

The most well known section of the speech is:

“A house divided against itself cannot stand. I believe this government cannot endure, permanently, half slave and half free. I do not expect the Union to be dissolved — I do not expect the house to fall — but I do expect it will cease to be divided. It will become all one thing or all the other. Either the opponents of slavery will arrest the further spread of it, and place it where the public mind shall rest in the belief that it is in the course of ultimate extinction; or its advocates will push it forward, till it shall become lawful in all the States, old as well as new — North as well as South.”

Abraham Lincoln in 1858 – The year he delivered his ‘House Divided’ speech.

The following is the text of Abraham Lincoln’s ‘House Divided’ Speech delivered June 16, 1858;

Mr. President and Gentlemen of the Convention:

If we could first know where we are and whither we are tending, we could better judge what to do and how to do it. We are now far into the fifth year since a policy was initiated with the avowed object and confident promise of putting an end to slavery agitation. Under the operation of that policy, that agitation has not only not ceased but has constantly augmented. In my opinion, it will not cease until a crisis shall have been reached and passed. “A house divided against itself cannot stand.” I believe this government cannot endure, permanently, half slave and half free. I do not expect the Union to be dissolved; I do not expect the house to fall; but I do expect it will cease to be divided. It will become all one thing, or all the other. Either the opponents of slavery will arrest the further spread of it and place it where the public mind shall rest in the belief that it is in the course of ultimate extinction, or its advocates will push it forward till it shall become alike lawful in all the states, old as well as new, North as well as South.

Have we no tendency to the latter condition?

Let anyone who doubts carefully contemplate that now almost complete legal combination — piece of machinery, so to speak — compounded of the Nebraska doctrine and the Dred Scott decision. Let him consider, not only what work the machinery is adapted to do, and how well adapted, but also let him study the history of its construction and trace, if he can, or rather fail, if he can, to trace the evidences of design and concert of action among its chief architects, from the beginning.

But, so far, Congress only had acted; and an endorsement by the people, real or apparent, was indispensable to save the point already gained and give chance for more.

This necessity had not been overlooked, but had been provided for, as well as might be, in the notable argument of “squatter sovereignty,” other-wise called “sacred right of self-government,” which latter phrase, though expressive of the only rightful basis of any government, was so perverted in this attempted use of it as to amount to just this: That if any one man choose to enslave another, no third man shall be allowed to object. That argument was incorporated into the Nebraska Bill itself, in the language which follows:

It being the true intent and meaning of this act not to legislate slavery into an territory or state, nor to exclude it therefrom, but to leave the people there-of perfectly free to form and regulate their domestic institutions in their own way, subject only to the Constitution of the United States.

Then opened the roar of loose declamation in favor of “squatter sovereignty” and “sacred right of self-government.” “But,” said opposition members, “let us amend the bill so as to expressly declare that the people of the territory may exclude slavery.” “Not we,” said the friends of the measure; and down they voted the amendment.

While the Nebraska Bill was passing through Congress, a law case, involving the question of a Negro’s freedom, by reason of his owner having voluntarily taken him first into a free state and then into a territory covered by the congressional prohibition, and held him as a slave for a long time in each, was passing through the United States Circuit Court for the district of Missouri; and both Nebraska Bill and lawsuit were brought to a decision in the same month of May 1854. The Negro’s name was Dred Scott, which name now designates the decision finally made in the case. Before the then next presidential election, the law case came to, and was argued in, the Supreme Court of the United States; but the decision of it was deferred until after the election. Still, before the election, Senator Trumbull, on the floor of the Senate, requested the leading advocate of the Nebraska Bill to state his opinion whether the people of a territory can constitutionally exclude slavery from their limits; and the latter answers: “That is a question for the Supreme Court.”

The election came. Mr. Buchanan was elected, and the endorsement, such as it was, secured. That was the second point gained. The endorsement, however, fell short of a clear popular majority by nearly 400,000 votes, and so, perhaps, was not overwhelmingly reliable and satisfactory. The outgoing President, in his last annual message, as impressively as possible echoed back upon the people the weight and authority of the endorsement. The Supreme Court met again, did not announce their decision, but ordered a reargument.

The presidential inauguration came, and still no decision of the Court; but the incoming President, in his inaugural address, fervently exhorted the people to abide by the forthcoming decision, whatever it might be. Then, in a few days, came the decision.

The reputed author of the Nebraska Bill finds an early occasion to make a speech at this capital endorsing the Dred Scott decision, and vehemently denouncing all opposition to it. The new President, too, seizes the early occasion of the Silliman letter to endorse and strongly construe that decision, and to express his astonishment that any different view had ever been entertained!

Under the Dred Scott decision, “squatter sovereignty” squatted out of existence, tumbled down like temporary scaffolding; like the mold at the foundry, served through one blast and fell back into loose sand; helped to carry an election and then was kicked to the winds. His late joint struggle with the Republicans against the Lecompton constitution involves nothing of the original Nebraska doctrine. That struggle was made on a point — the right of a people to make their own constitution — upon which he and the Republicans have never differed.

The several points of the Dred Scott decision, in connection with Senator Douglas’ “care not” policy, constitute the piece of machinery in its present state of advancement. This was the third point gained. The working points of that machinery are:

First, that no Negro slave, imported as such from Africa, and no descendant of such slave can ever be a citizen of any state in the sense of that term as used in the Constitution of the United States. This point is made in order to deprive the Negro, in every possible event, of the benefit of that provision of the United States Constitution which declares that “the citizens of each state shall be entitled to all the privileges and immunities of citizens in the several states.”

Second, that, “subject to the Constitution of the United States,” neither Congress nor a territorial legislature can exclude slavery from any United States territory. This point is made in order that individual men may fill up the territories with slaves, without danger of losing them as property, and thus enhance the chances of permanency to the institution through all the future.

Third, that whether the holding a Negro in actual slavery in a free state makes him free, as against the holder, the United States courts will not decide, but will leave to be decided by the courts of any slave state the Negro may be forced into by the master. This point is made, not to be pressed immediately but, if acquiesced in for awhile, and apparently endorsed by the people at an election, then to sustain the logical conclusion that what Dred Scott’s master might lawfully do with Dred Scott in the free state of Illinois, every other master may lawfully do with any other one, or 1,000 slaves, in Illinois or in any other free state.

Auxiliary to all this, and working hand in hand with it, the Nebraska doctrine, or what is left of it, is to educate and mold public opinion, at least Northern public opinion, not to care whether slavery is voted down or voted up. This shows exactly where we now are; and partially, also, whither we are tending.

It will throw additional light on the latter to go back and run the mind over the string of historical facts already stated. Several things will now appear less dark and mysterious than they did when they were transpiring. The people were to be left “perfectly free,” “subject only to the Constitution.” What the Constitution had to do with it, outsiders could not then see. Plainly enough, now, it was an exactly fitted niche for the Dred Scott decision to afterward come in and declare the perfect freedom of the people to be just no freedom at all.

Why was the amendment expressly declaring the right of the people voted down? Plainly enough, now, the adoption of it would have spoiled the niche for the Dred Scott decision. Why was the Court decision held up? Why even a senator’s individual opinion withheld till after the presidential election? Plainly enough, now, the speaking out then would have damaged the “perfectly free” argument upon which the election was to be carried. Why the outgoing President’s felicitation on the endorsement? Why the delay of a reargument? Why the incoming President’s advance exhortation in favor of the decision? These things look like the cautious patting and petting of a spirited horse preparatory to mounting him when it is dreaded that he may give the rider a fall. And why the hasty after-endorsement of the decision by the President and others?

We cannot absolutely know that all these exact adaptations are the result of preconcert. But when we see a lot of framed timbers, different portions of which we know have been gotten out at different times and places and by different workmen — Stephen, Franklin, Roger, and James, for instance — and when we see these timbers joined together and see they exactly make the frame of a house or a mill, all the tenons and mortises exactly fitting, and all the lengths and proportions of the different pieces exactly adapted to their respective places, and not a piece too many or too few, not omitting even scaffolding, or, if a single piece be lacking, we see the place in the frame exactly fitted and prepared yet to bring such piece in — in such a case, we find it impossible not to believe that Stephen and Franklin and Roger and James all understood one another from the beginning, and all worked upon a common plan or draft drawn up before the first blow was struck.