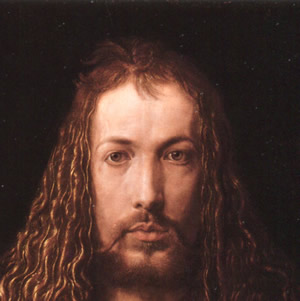 Born 21 May 1471, Albrecht Dürer was a German painter, printmaker, engraver, mathematician, and theorist. He has been regarded as the greatest artist of the Northern Renaissance. His ambitious work with woodcuts helped to revolutionize the medium.

At the age of 15, Dürer began as an apprentice to the leading artist of Nuremberg, Michael Wolgemut. Though Wolgemut produced various types of art, his greatest focus was on woodcuts for books. Dürer’s godfather, Anton Koberger, the most successful publisher in Germany made extensive use of woodcut illustrations coming from the Wolgemut workshop. It is believed that Dürer didn’t cut woodblocks himself, but special craftsmen did the work. Durer either drew directly on the blocks, or attached drawings to the block to be cut by craftsmen.

After completing his apprenticeship, Albrecht spent four years learning skills from other artists. He left Nuremberg in 1490 for this Wanderjahre. During this time he painted his first self-portrait for his fiancee Agnes Frey. After completing his Wanderjahre, he arrived back in Nuremberg in July of 1494 and married Agnes. Three months later left again, this time for Italy. He made watercolor sketches during his travels which are the first pure landscape studies known in Western art history.

Among the most famous works of Albrecht Dürer are sixteen designs for the Apocalypse created in 1498. His success and reputation spread throughout Europe and the ability to promote and distribute his work certainly influenced other artists who later would collaborate with printmakers to distribute their works. 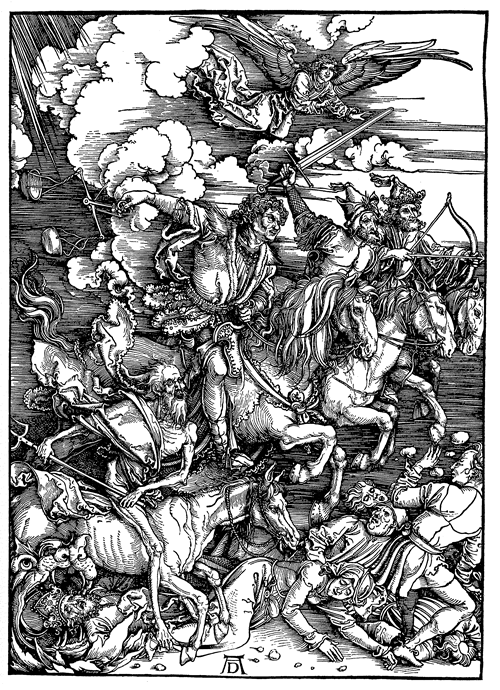 One of sixteen Apocalypse prints by Albrecht Durer