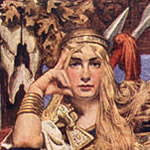 Angus Ōg (Angus the Young), son of the Dagda, by Boanna (the river Boyne), was the Irish god of love. His palace was supposed to be at New Grange, on the Boyne. Four bright birds that ever hovered about his head were supposed to be his kisses taking shape in this lovely form, and at their singing love came springing up in the hearts of youths and maidens. Once he fell sick of love for a maiden whom he had seen in a dream. He told the cause of his sickness to his mother Boanna, who searched all Ireland for the girl, but could not find her. Then the Dagda was called in, but he too was at a loss, till he called to his aid Bōv the Red, king of the Danaans of Munster who was skilled in all mysteries and enchantments. Bōv undertook the search, and after a year had gone by declared that he had found the visionary maiden at a lake called the Lake of the Dragon’s Mouth.

Angus goes to Bōv, and, after being entertained by him three days, is brought to the lake shore, where he sees thrice fifty maidens walking in couples, each couple linked by a chain of gold, but one of them is taller than the rest by a head and shoulders. “That is she!” cries Angus. “Tell us by what name she is known.” Bōv answers that her name is Caer, daughter of Ethal Anubal, a prince of the Danaans of Connacht. Angus laments that he is not strong enough to carry her off from her companions, but, on Bōv’s advice, betakes himself to Ailell and Maev, the mortal King and Queen of Connacht, for assistance. The Dagda and Angus then both repair to the palace of Ailell, who feasts them for a week, and then asks the cause of their coming. When it is declared he answers, “We have no authority over Ethal Anubal.” They send a message to him, however, asking for the hand of Caer for Angus, but Ethal refuses to give her up. In the end he is besieged by the combined forces of Ailell and the Dagda, and taken prisoner. When Caer is again demanded of him he declares that he cannot comply, “for she is more powerful than I.” He explains that she lives alternately in the form of a maiden and of a swan year and year about, “and on the first of November next,” he says, “you will see her with a hundred and fifty other swans at the Lake of the Dragon’s Mouth.” 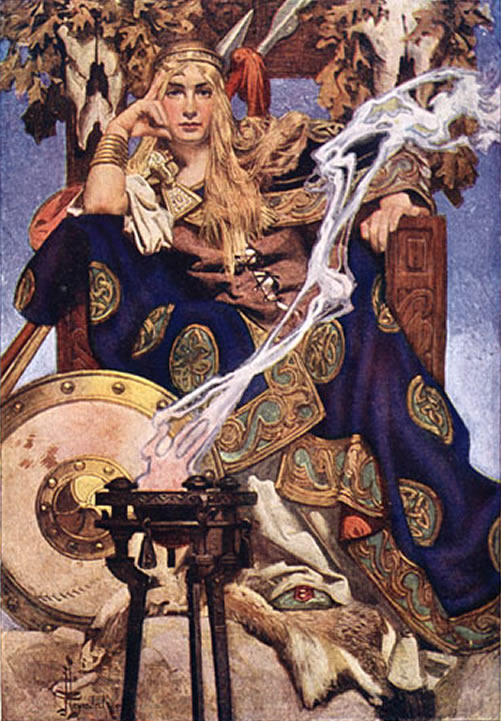 Maev - Queen of Connacht who provided assistance to Angus Ōg

Angus goes there at the appointed time, and cries to her, “Oh, come and speak to me!” “Who calls me?” asks Caer. Angus explains who he is, and then finds himself transformed into a swan. This is an indication of consent, and he plunges in to join his love in the lake. After that they fly together to the palace on the Boyne, uttering as they go a music so divine that all hearers are lulled to sleep for three days and nights.

Angus is the special deity and friend of beautiful youths and maidens. Dermot of the Love-spot, a follower of Finn mac Cumhal, and lover of Grania was bred up with Angus in the palace on the Boyne. He was the typical lover of Irish legend. When he was slain by the wild boar of Ben Bulben, Angus revives him and carries him off to share his immortality in his fairy palace.