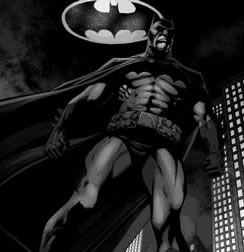 Originally published April 25, 1939, Batman was known as “The Bat-Man”, but over the course of time has also gone by other names such as “The Caped Crusader”, and “The Dark Knight”.

Batman’s alter-ego, Gotham City millionaire Bruce Wayne, was witness to the murder of his parents as a child leading him to swear vengeance on all criminals. Batman possesses no superpowers but instead makes use of natural abilities, technology, wealth, etc. in his fight against crime, making him a more attainable superhero. Aided in his fight against crime by Robin, Alfred – the butler, police commissioner Gordon, and others, he battles colorful villains which have been a key factor in the success of the character. These include Joker, Riddler, Penguin, and Catwoman.

In 1940, Batman got his own comic book title, and in the 1960s the television series starring Adam West gave him a less dark, very colorful image. In the late 1980s and early 1990s a new series of Batman movies moved the character back to his darker roots, and with the release of the latest Batman movies, Batman Begins, and The Dark Knight, the move towards the traditional darker Batman has continued.

Image from the book The Essential Batman Encyclopedia available at our store: Batman Store