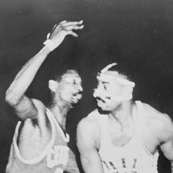 On May 5, 1969, Bill Russell, legendary NBA player, would play the final game of his career in typical Bill Russell fashion.

The Final Game
The aging Celtics entered the playoffs as the fourth-seed in the Eastern Conference and their regular-season record was their worst in over a decade. They upset the Philadelphia 76ers and the New York Knicks to reach the NBA Finals against arch-rival Wilt Chamberlain and his star Laker teammates Elgin Baylor and Jerry West. After losing games one and two to the heavily favored Lakers, the Celtics would win game three and narrowly win game four with a buzzer beater. Splitting games five and six, the series would come down to the final game. Using the ‘proceedings of the Lakers’ victory ceremony’ (printed on the game program) as motivation for his team, Russell employed a running game against the Lakers. He believed that style of game would be won by the more determined team and not necessarily the better team. At age 35, Russell would collect 21 rebounds, in a 108-106 Celtics victory, and the Bill Russell would win his 11th championship in 13 seasons.
Russell would promptly retire, and the career of one of the greatest (arguably the greatest) NBA player in history would be over.

Recognition
In addition to winning 11 NBA titles, Bill Russell was a five-time NBA MVP. He was a twelve time NBA All-Star, All-Star MVP (1963), Olympic Gold Medalist, and voted one of the 50 Greatest Players in NBA History. In 1975 Bill Russell was inducted into the Naismith Basketball Hall of Fame.