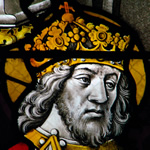 Pepin (King of the Franks) had two sons, Charles and Carloman. After the death of their father they ruled together, but in a few years Carloman died, and Charles became sole king. Charles was the most famous of the kings of the Franks. He did so many great and wonderful things that he is called Charlemagne which means Charles the Great.

He was a great soldier. For thirty years he carried on a war against the Saxons. Finally he conquered them, and their great chief, Wittekind, submitted to him. The Saxons were a people of Germany, who then lived near the land of the Franks. They spoke the same language and were of the same race as the Franks, but had not been civilized by contact with the Romans. They were still pagans, just as the Franks had been before Clovis became a Christian. They actually offered human sacrifices. After Charlemagne conquered them he made their lands part of his kingdom. A great number of them, among whom was Wittekind, then became Christians and were baptized; and soon they had churches and schools in many parts of their country. 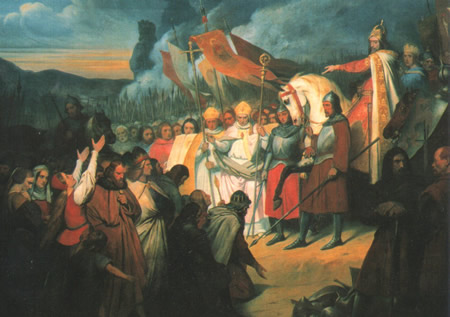 After he had conquered the Lombards he carried on war, in 778, in Spain. A large portion of Spain was then held by the Moorish Saracens. But a Mohammedan leader from Damascus had invaded their country, and the Moors invited Charlemagne to help them. He therefore led an army across the Pyrenees. He succeeded in putting his Moorish friends in possession of their lands in Spain and then set out on his return to his own country. On the march his army was divided into two parts. The main body was led by Charlemagne himself. The rear guard was commanded by a famous warrior named Roland. While marching through the narrow pass of Roncesvalles, among the Pyrenees, Roland’s division was attacked by a tribe called the Basques, who lived on the mountain slopes of the neighboring region. High cliffs walled in the pass on either side. From the tops of these cliffs the Basques hurled down rocks and trunks of trees upon the Franks, and crushed many of them to death. Besides this, the wild mountaineers descended into the pass and attacked them with weapons. Roland fought bravely; but at last he was overpowered, and he and all his men were killed.

Roland had a friend and companion named Oliver, who was as brave as himself. Many stories and songs have been written telling of the wonderful adventures they were said to have had and of their wonderful deeds in war.

The work of Charlemagne in Spain was quickly undone; for Abder-Rahman, the leader of the Mohammedans who had come from Damascus, soon conquered almost all the territory south of the Pyrenees.

For more than forty years Charlemagne was king of the Franks; but a still greater dignity was to come to him. In the year 800 some of the people in Rome rebelled against the Pope, and Charlemagne went with an army to put down the rebellion. He entered the city with great pomp and soon conquered the rebels. On Christmas day he went to the church of St. Peter, and as he knelt before the altar the Pope placed a crown upon his head, saying: “Long live Charles Augustus, Emperor of the Romans.” The people assembled in the church shouted the same words; and so Charlemagne was now emperor of the Western Roman Empire, as well as king of the Franks. (The emperors of Constantinople still called themselves Roman Emperors, and still claimed Italy, Germany and France as parts of their empire, though really their authority had not been respected in these countries for more than 300 years.)

Charlemagne built a splendid palace at Aix-la-Chapelle, a town in Germany, where perhaps he was born.

Charlemagne was a tall man, with long, flowing beard, and of noble appearance. He dressed in very simple style; but when he went into battle he wore armor, as was the custom for kings and nobles, and often for ordinary soldiers in his day.

Armor was made of leather or iron, or both together. There was a helmet of iron for the head, and a breastplate to cover the breast, or a coat of mail to cover the body. The coat of mail was made of small iron or steel rings linked together, or fastened on to a leather shirt. Coverings for the legs and feet were often attached to the coat. 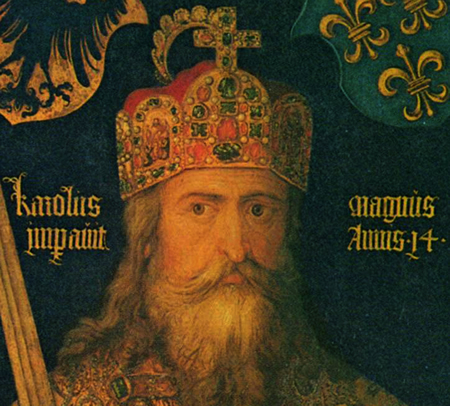 Charlemagne was a great king in may other ways besides the fighting of battles. He did much for the good of his people. He made many excellent laws and appointed judges to see that the laws were carried out. He established schools and placed good teachers in charge of them. He had a school in his palace for his own children, and he employed as their teacher a very learned Englishman named Alcuin. In those times few people could read or write. There were not many schools anywhere, and in most places there were none at all. Even the kings had little education. Indeed, few of them could write their own names, and most of them did not care about sending their children to school. They did not think that reading or writing was of much use; but thought that it was far better for boys to learn to be good soldiers, and for girls to learn to spin and weave. Charlemagne had a very different opinion. He was fond of learning; and whenever he heard of a learned man, living in any foreign country, he tried to get him to come and live in Frankland.

The fame of Charlemagne as a great warrior and a wise emperor spread all over the world. Many kings sent messengers to him to ask his friendship, and bring him presents. Harun-al-Rashid, the famous caliph, who lived at Baghdad, in Asia, sent him an elephant and a clock which struck the hours. The Franks were much astonished at the sight of the elephant; for they had never seen one before. They also wondered much at the clock. In those days there were in Europe no clocks such as we have; but water-clocks and hour-glasses were used in some places. The water-clock was a vessel into which water was allowed to trickle. It contained a float which pointed to a scale of hours at the side of the vessel. The float gradually rose as the water trickled in.

Charlemagne died in 814. He was buried in the church which he had built at Aix-la-Chapelle. His body was placed in the tomb, seated upon a grand chair, dressed in royal robes, with a crown on the head, a sword at the side, and a Bible in the hands.

This famous emperor is known in history as Charlemagne, which is the French word for the German name Karl der Grosse (Charles the Great), the name by which he was called at his own court during his life. The German name would really be a better name for him; for he was a German, and German was the language that he spoke. The common name of his favorite residence, Aix-la-Chapelle, also is French, but he knew the place as Aachen.

The great empire which Charlemagne built up held together only during the life of his son. Then it was divided among his three grandsons. Louis took the eastern part, Lo-thaire’ took the central part, with the title of emperor, and Charles took the western part.