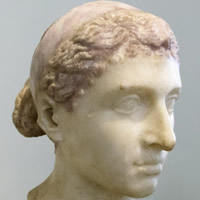 Cleopatra (at age 18) began to assert herself as sole ruler of Egypt at the expense of her co-ruling brother Ptolemy XIII (10), but within three years her enemies placed Ptolemy on the throne as the sole ruler. Thinking he would please Caesar, Ptolemy instead angered him by murdering the great Roman military and political leader Pompey. Cleopatra saw an opportunity and had herself smuggled into Ptolemy’s palace in a carpet to meet with Caesar. She became his mistress and with the defeat of Ptolemy’s army at the Battle of the Nile, Caesar backed her claim to the throne naming Ptolemy XIV as co-ruler. After allegedly poisoning her new co-ruler, Cleopatra made her son (by Caesar) Caesarion her co-regent and successor. After Caesar’s death, she would align herself with Mark Antony with whom she had three children. After Antony’s defeat at Actium and his subsequent suicide, Cleopatra would follow – committing suicide with an asp bite on the arm.