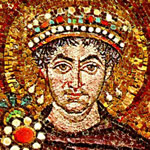 The following is the text of the First Preface from the Codex Justinianus (Code of Justinian) issued in 534 AD:

The Emperor Justinian to the Senate of the City of Constantinople. Those things which seem to many former Emperors to require correction, but which none of them ventured to carry into effect, We have decided to accomplish at the present time with the assistance of Almighty God; and to diminish litigation by the revision of the multitude of constitutions which are contained in the Three Codes; namely, the Gregorian, the Hermogenian, and the Theodosian, as well as in those other Codes promulgated after them by Theodosius of Divine Memory, and by other Emperors, who succeeded him, in addition to those which We Ourselves have promulgated, and to combine them in a single Code, under Our auspicious name, in which compilation should be included not only the constitutions of the three above-mentioned Codes, but also such new ones as subsequently have been promulgated.

(1) Therefore, having in view the accomplishment of this extensive work, as well as the maintenance of the public welfare, We have chosen, as being competent for a task involving such labor and care, John, a most eminent man, Ex-Quæstor of our Sacred Palace, and of consular, as well as patrician dignity; Leontius, a man of the highest standing, an officer in the army, an Ex-Prætorian Prefect, of consular and patrician dignity; Phocas, a most illustrious man, an officer of the army, also of consular and patrician dignity; Basilis, a most excellent man, Ex-Prætorian Prefect of the East, and of patrician rank; Thomas, a most glorious man, Quæstor of our Sacred Palace, and Ex-Consul; Tribonian, a distinguished man of great authority, and invested with magisterial dignity; Constantine, an illustrious man, one of the Stewards of Our bounty, Master of Requests, and of Our Judicial Inquiries; Theophilus, a most eminent man, and one of the members of our Sacred Consistory, a Doctor of Laws in this Fair City; and Dioscorous and Præsentinus, most learned jurists of the Prætorian Tribunal.

(2) To these We have especially entrusted the suppression of superfluous preambles, so far as this can be done without affecting the efficacy of the laws, as well as of such enactments as are similar or contradictory, and, in addition to this, the division of the laws; and it will be to the advantage to omit such as have fallen into desuetude, to give expression in concise terms to those which are included in the said three Codes, and in the New Constitutions, and to place them under suitable titles, adding and omitting portions of the same, and, indeed, changing their phraseology where convenience requires it.

bringing under one head enactments which are scattered through various constitutions, and rendering their meaning clearer; so that the order of the said constitutions may appear not only from the days and the consulate when they were enacted, but also from their composition itself, by placing those primarily published in the first place, and those which follow in the second. And if any laws should be found in the three ancient codes without the date and the name of the consul, or if any new constitutions have been inserted among them, they should be so arranged that no doubt may arise with reference to their general application, in such a way that rescripts addressed to certain individuals, or originally issued by pragmatic sanction, may obtain the effect of general constitutions, where, for the public welfare, they have been included in a new code.

(3) Hence We have hastened to bring these matters to your notice, in order that you may be informed to what an extent Our daily care is occupied with matters having reference to the common welfare, by collecting such laws as are certain and clear, and incorporating them into a single code, so that, by means of this code, designated by Our auspicious name, the citation of the various constitutions may cause decisions to be more readily rendered in all litigation.

Given at Constantinople, on the Ides of February, during the reign and second Consulship of the Emperor Justinian.