Conselheiro – Mysteries of a Mystic 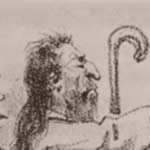 INTRODUCTION
Historical information about internationally-prominent controversial individuals is often difficult to decipher. Reports of their lives vary widely based on the perspectives and prejudices of the individuals documenting the events. Add to that the challenges of re-creating the facts surrounding the life of an obscure individual whose life would suddenly be cast into the spotlight after having spent the majority of his years wandering quietly through the backlands of Brazil, and it becomes easier to understand why there are so many mysteries surrounding the Mystic of Canudos.

EARLY YEARS
In the small town of Quixeramobim, a child was born in 1828 whose destiny would threaten, albeit briefly, the foundation of the First Republic of Brazil. Antonio Vicente Mendes Maciel, later known as Conselheiro (the Councilor) was a sober child. His mother, Maria Joaquina de Nascimento, died when he was six. Antonio worked as a cashier or manager of his father’s store as a youth, and discharged his responsibilities carefully. The death of his father in 1855 left Antonio with complete responsibility for his father’s business and his four unmarried younger sisters. His marriage in 1857 to his fifteen-year-old cousin Brasilina Laurentina de Lima would be one of the key turning points in his life. Brasilina would have an affair with Joao de Melo a non-commissioned soldier (she would later leave him as well, ending her days as a beggar in the streets of Sobral.) Wishing to distance himself from the shame, Antonio went to the south of Ceara. Fate would place him in the path of his wife’s lover, and the mild-mannered even-tempered Antonio would crack. Unable to successfully lay hands on de Melo, he unleashed his frustrations on one of his relatives who had provided him with shelter. Maciel was imprisoned for the event, notwithstanding the fact that the victim testified at the trial that Antonio was within his rights. He would eventually escape from prison. Ten years would pass and ‘what he was doing, how he lived during these ten veiled years, that is to us unknown…He himself never unlocked his lips upon his wanderings.’

REAPPEARANCE
After ten years he would again resurface in the state of Bahia. No longer would he be the carefully dressed cashier, but ‘sunburned and worn with fasting, his eyes wide open, fixed and staring, his sunken face, and his thin limbs, worn with privation, gave him the look of a monk from the Thebais.’ Lieutenant-colonel Vieira de Aguiar a member of the Bahian state police described Conselheiro as “short, emaciated, swarthy, with dark hair and a long beard, dressed in a beltless blue tunic, living alone in an empty house.” He spent this period of time ‘walking from town to town, [asking] to be permitted to rebuild dilapidated walls of churches and cemeteries fallen into disrepair.’ Conselheiro wandered throughout the sertao speaking against Masonry, Protestantism, and secularism, but most specifically he preached penitence, morality, righteousness, and devotion. 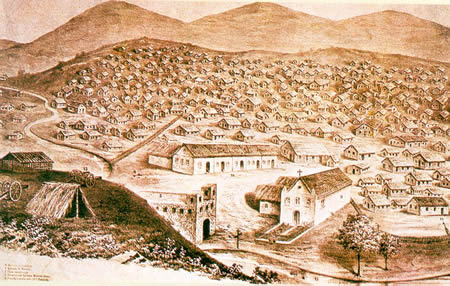 Painting of Canudos, a rebel settlement in the interior of Bahia, in the early years of the Republic of Brazil

THE RISE OF CANUDOS
In 1893 Conselheiro began to preach about a holy land, deep in the backlands. The response to his preaching was immediate. ‘Streams of people…followed him to Canudos, leaving their homes,…selling their property…, and carrying their possessions, their furniture, their portable altars to the new colony.’
Residence in the new settlement did not require any form of religious “rebirth”. Some within the community adopted stricter adherence to Catholicism but others did not. ‘There was no drunkenness, no prostitution, no hunger caused by lack of food. Many conselheiristas worked outside the community. They weren’t prisoners.’
Canudos, or ‘New Jerusalem’ grew to contain over five thousand mud-and-wattle huts, and at its height approximately 35,000 residents. It grew to become the largest urban site in Bahia after Salvador.

VIEW FROM THE INSIDE
Notwithstanding the reputation of miracles that developed around him, Conselheiro did not dwell on these, but preached of faith and hard work. ‘Conselheiro never asserted that he had been sent from God, or that he was a prophet: he remained within the boundaries of formal Roman Catholicism as a lay preacher and beato. His works were performed in the name of the church and in the service of local priests.’ Conselheiro developed a substantial following. ‘The merchant Antonio Vilanova remarked that when Conselheiro preached, a throng of some five thousand listened raptly – “the same number as listened to Jesus Christ.”’ A survivor of Canudos said later that, “his listeners felt as if they were flying up to the clouds.”

VIEW FROM THE OUTSIDE
Conselheiro created mixed feelings among the clergy of the time. ‘In February 1882, Archbishop Dom Luis Antonio dos Santos circulated a letter prohibiting non-ordained persons from preaching, [but] Priests in several localities ignored the archbishop’s order [and] gave him free access to their churches.’ Later in 1887, a local member of the clergy petitioned the Archbishop of Bahia saying that the “cause of our holy faith is suffering, through the proceedings of one Antonio Maciel, who is trying to convince the people that he is the Holy Ghost.”
The rapid growth and success of Conselheiro’s community of Canudos combined with a lack of understanding by those who were not a part of the society created an environment of fear and misconception. In a letter dated February 28, 1894, Jose Americo a citizen of the sertao, said the following:
“Today things aren’t what they used to be…[We have to contend with] that damned ‘Conselheiro Antonio,’ who is exercising more power now than the first Napoleon…We will soon see this sertao confiscated by [Conselheiro] and his people, who now number more than 16,000, all miserable ex-slaves and criminals from every province, without a single one who is a human being; [Conselheiro is] imposing his own laws, raising an army of soldiers, and doing anything he wishes.” A journalist of the time, Silvio Romero, made reference to Canudos’ ‘army of believers committing depredations of all kinds.”
Conselheiro would be accused of having killed both his wife and mother. According to one source ‘…he married against his mothers wishes. Jealousy sprang up between parent and wife. Maciel’s mind was poisoned by his mother’s constant insinuations that she had proof of the wife’s infidelity. She told her son to secrete himself in the bushes at the foot of the garden, and that shortly after nightfall he would see his wife meet her lover. To the wife a similar story was told, and in the evening the mother donned male costume and approached the trysting-place she had indicated to husband and wife. In the darkness Maciel saw, as he thought, his wife and her lover, and fired first at the one and then at the other, killing both.’ The story goes on to indicate that due to his remorse for the event, he determined to devote the rest of his life to missionary work. The charges failed to be substantiated, since the two victims were both still alive.

BEGINNING OF THE END
There are varying stories on the events that were the beginning of the end of the Canudos’ community as well. One source indicates that authorities of Bahia nominated a magistrate for Canudos. This individual became involved with a woman from the community and was fearful of remaining in Canudos. He asked for an appointment to a neighboring community which was granted. When Conselheiro sent a group of men to cut wood for a construction project and the former magistrate saw the men approaching the vicinity of his new residence, he feared they were searching for him and sent police to drive them from the district. A fight ensued with the police being defeated. According to this account, this event led to the subsequent events that would eventually doom Canudos.
Another account indicates that a notice about taxation appeared on a town notice board and after a fiery sermon, Conselheiro burned the notice boards in a bonfire accompanied by hymns. ‘The government sent all the forces they could muster in the province to capture him and to disperse his followers, and thus nip the insurrection in the bud.’ After being fired upon, their ranks routed the soldiers completely.
Still another account indicates that due to a difficulty that arose between the governor of Bahia and Conselheiro, he was ordered to leave the settlement and take his people with him. After refusal to move, a police force was sent to eject the settlers which suffered heavy losses without accomplishing their mission.
Other accounts attribute the drain of surplus labor from the surrounding areas and exaggerated tales of religious fanaticism causing the local elites to demand intervention.
The beginning of the end may have been any of these, or a combination. While there are varying accounts on how the initial confrontation occurred and the events surrounding it, once the jaguncos defeated the initial attack of the authorities, the attention given to the confrontations that would ensue provides us with a much clearly picture of those events.

THE FALL OF CANUDOS
In October 1897, thousands of residents of Canudos died in defense of their homes at the hands of a furious attack by the Brazilian army. Approximately 5,200 homes were burned to the ground. Canudos had come ‘to be seen as a threat so dangerous that only its destruction could ensure the survival of the Brazilian Republic’ and so the second largest urban city of Bahia was reduced to rubble. The once obscure Antonio Vicente Mendes Maciel who died prior to the final battle, would now have his body exhumed, his head severed and paraded through the streets. An individual whose life thousands had looked upon as an example of the path to a better world was now looked upon by thousands who saw his death as the path to a better Brazil. 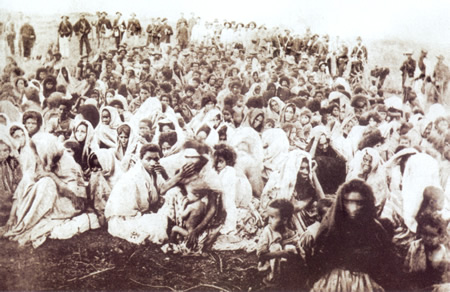 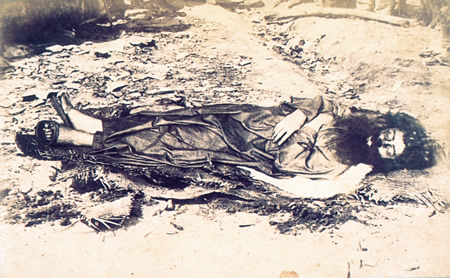 Only known photograph of Conselheiro taken after his death in 1897