Consualia and the Sabine Women 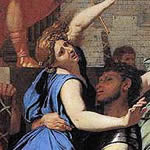 The Consualia Festival was held twice a year, on August 21st and December 15th.

CONSUALIA [was] a festival, with games, celebrated by the Romans…in honour of Consus, the god of secret deliberations, or…of Neptunus Equestris. Plutarch…say[s] that Neptunus Equestris and Consus were only different names for one and the same deity. It was solemnized every year in the circus, by the symbolical ceremony of uncovering an altar dedicated to the god, which was buried in the earth. For Romulus, who was considered as the founder of the festival, was said to have discovered an altar in the earth on that spot. The solemnity took place on the 21st of August with horse and chariot races, and libations were poured into the flames which consumed the sacrifices. During these festive games, horses and mules were not allowed to do any work, and were adorned with garlands of flowers. It was at their first celebration that, according to the ancient legend, the Sabine maidens were carried off. Virgil, in speaking of the rape of the Sabines, describes it as having occurred during the celebration of the Circensian games, which can only be accounted for by supposing that the great Circensian games, in subsequent times, superseded the ancient Consualia…

Livy describes the abduction of the Sabine women as follows:

And now the Roman state was become so powerful, that it was a match for any of the neighboring nations in war, but, from the paucity of women, its greatness could only last for one age of man; for they had no hope of issue at home, nor had they any intermarriages with their neighbors. Therefore, by the advice of the Fathers, Romulus sent ambassadors to the neighboring states to solicit an alliance and the privilege of intermarriage for his new subjects…No where did the embassy obtain a favorable hearing…The Roman youth resented this conduct bitterly, and the matter unquestionably began to point towards violence. Romulus, in order that he might afford a favorable time and place for this, dissembling his resentment, purposely prepares games in honor of Neptunus Equestris; he calls them Consualia. He then orders the spectacle to be proclaimed among their neighbors; and they prepare for the celebration with all the magnificence they were then acquainted with, or were capable of doing, that they might render the matter famous, and an object of expectation. Great numbers assembled, from a desire also of seeing the new city; especially their nearest neighbors, the Cæninenses, Crustumini, and Antemnates. Moreover the whole multitude of the Sabines came, with their wives and children. Having been hospitably invited to the different houses, when they had seen the situation, and fortifications, and the city crowded with houses, they became astonished that the Roman power had increased so rapidly. When the time of the spectacle came on, and while their minds and eyes were intent upon it, according to concert a tumult began, and upon a signal given the Roman youth ran different ways to carry off the virgins by force. A great number were carried off at hap-hazard, according as they fell into their hands. 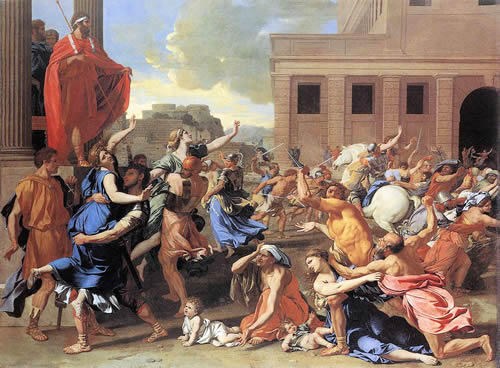 The Abduction of the Sabine Women

Persons from the common people, who had been charged with the task, conveyed to their houses some women of surpassing beauty, destined for the leading senators. They say that one, far distinguished beyond the others for stature and beauty, was carried off by the party of one Thalassius, and whilst many inquired to whom they were carrying her, they cried out every now and then, in order that no one might molest her, that she was being taken to Thalassius; that from this circumstance this term became a nuptial one. The festival being disturbed by this alarm, the parents of the young women retire in grief, appealing to the compact of violated hospitality, and invoking the god, to whose festival and games they had come, deceived by the pretense of religion and good faith. Neither had the ravished virgins better hopes of their condition, or less indignation. But Romulus in person went about and declared, “That what was done was owing to the pride of their fathers, who had refused to grant the privilege of marriage to their neighbors; but notwithstanding, they should be joined in lawful wedlock, participate in all their possessions and civil privileges, and, than which nothing can be dearer to the human heart, in their common children. He begged them only to assuage the fierceness of their anger, and cheerfully surrender their affections to those to whom fortune had consigned their persons.” [He added,] “That from injuries love and friendship often arise; and that they should find them kinder husbands on this account, because each of them, besides the performance of his conjugal duty, would endeavor to the utmost of his power to make up for the want of their parents and native country.” To this the caresses of the husbands were added, excusing what they had done on the plea of passion and love, arguments that work most successfully on women’s hearts.