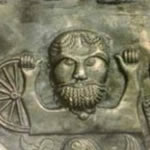 The Dagda Mōr was the father and chief of the People of Dana. A certain conception of vastness attaches to him and to his doings. In the Second Battle of Moytura his blows sweep down whole ranks of the enemy, and his spear, when he trails it on the march, draws a furrow in the ground like the fosse which marks the mearing of a province. An element of grotesque humour is present in some of the records about this deity. When the Fomorians give him food on his visit to their camp, the porridge and milk are poured into a great pit in the ground, and he eats it with a spoon big enough, it was said, for a man and a woman to lie together in it. With this spoon he scrapes the pit, when the porridge is done, and shovels earth and gravel unconcernedly down his throat. Like all the Danaans, he is a master of music, as well as of other magical endowments, and owns a harp which comes flying through the air at his call. “The tendency to attribute life to inanimate things is apparent in the Homeric literature, but exercises a very great influence in the mythology of this country. The living, fiery spear of Lugh; the magic ship of Mananan; the sword of Conary Mōr, which sang; Cuchulain’s sword, which spoke; the Lia Fail, Stone of Destiny, which roared for joy beneath the feet of rightful kings; the waves of the ocean, roaring with rage and sorrow when such kings are in jeopardy; the waters of the Avon Dia, holding back for fear at the mighty duel between Cuchulain and Ferdia, are but a few out of many examples.” A legend of later times tells how once, at the death of a great scholar, all the books in Ireland fell from their shelves upon the floor. 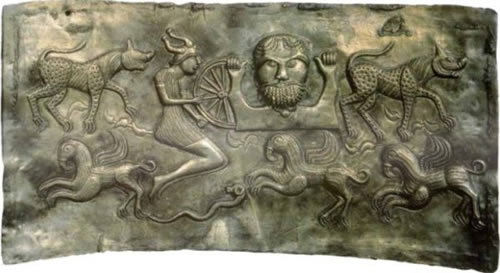 Image of Dagda from the Gundestrup Cauldron

SOURCE:MYTHS & LEGENDS OF THE CELTIC RACE BY T. W. ROLLESTON