Frigga – Queen of the Gods 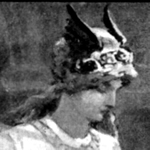 The Queen of the Gods

Frigga, or Frigg, daughter of Fiorgyn and sister of Jörd, according to some mythologists, is considered by others as a daughter of Jörd and Odin, whom she eventually married. This wedding caused such general rejoicing in Asgard, where the goddess was greatly beloved, that ever after it was customary to celebrate its anniversary with feast and song, and the goddess being declared patroness of marriage, her health was always proposed with that of Odin and Thor at wedding feasts.

Frigga was goddess of the atmosphere, or rather of the clouds, and as such was represented as wearing either snow-white or dark garments, according to her somewhat variable moods. She was queen of the gods, and she alone had the privilege of sitting on the throne Hlidskialf, beside her august husband. From thence she too could look over all the world and see what was happening, and, according to the belief of our ancestors, she possessed the knowledge of the future, which, however, no one could ever prevail upon her to reveal, thus proving that Northern women could keep a secret inviolate.

“Of me the gods are sprung;
And all that is to come I know, but lock
In my own breast, and have to none reveal’d.”

She was generally represented as a tall, beautiful, and stately woman, crowned with heron plumes, the symbol of silence or forgetfulness, and clothed in pure white robes, secured at the waist by a golden girdle, from which hung a bunch of keys, the distinctive sign of the Northern housewife, whose special patroness she was said to be. Although she often appeared beside her husband, Frigga preferred to remain in her own palace, called Fensalir, the hall of mists or of the sea, where she diligently plied her wheel or distaff, spinning golden thread or weaving long webs of bright-coloured clouds.

In order to perform this work she made use of a marvellous jewelled spinning wheel or distaff, which at night shone brightly in the sky as a constellation, known in the North as Frigga’s Spinning Wheel, while the inhabitants of the South called the same stars Orion’s Girdle.

To her hall Fensalir the gracious goddess invited husbands and wives who had led virtuous lives on earth, so that they might enjoy each other’s companionship even after death, and never be called upon to part again.

“There in the glen, Fensalir stands, the house
Of Frea, honour’d mother of the gods,
And shows its lighted windows and the open doors.”

Frigga was therefore considered the goddess of conjugal and motherly love, and was specially worshipped by married lovers and tender parents. This exalted office did not entirely absorb her thoughts however, for we are told that she was very fond of dress, and whenever she appeared before the assembled gods her attire was rich and becoming, and her jewels chosen with much taste.