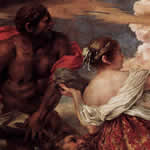 SECOND DYNASTY
ORIGIN OF MAN
Just as there were several theories concerning the origin of the world, so there were various accounts of the creation of man.

The first natural belief of the Greek people was that man had sprung from the earth. They saw the tender plants and flowers force their way through the ground in the early spring of the year after the frost of winter had disappeared, and so they naturally concluded that man must also have issued from the earth in a similar manner. Like the wild plants and flowers, he was supposed to have had no cultivation, and resembled in his habits the untamed beasts of the field, having no habitation except that which nature had provided in the holes of the rocks, and in the dense forests whose overarching boughs protected him from the inclemency of the weather.

In the course of time these primitive human beings became tamed and civilized by the gods and heroes, who taught them to work in metals, to build houses, and other useful arts of civilization. But the human race became in the course of time so degenerate that the gods resolved to destroy all mankind by means of a flood; Deucalion (son of Prometheus) and his wife Pyrrha, being, on account of their piety, the only mortals saved. 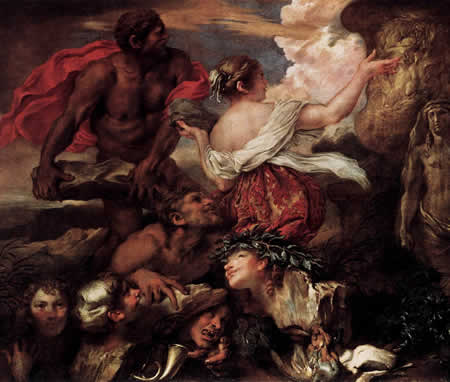 By the command of his father, Deucalion built a ship, in which he and his wife took refuge during the deluge, which lasted for nine days. When the waters abated the ship rested on Mount Othrys in Thessaly, or according to some on Mount Parnassus. Deucalion and his wife now consulted the oracle of Themis as to how the human race might be restored. The answer was, that they were to cover their heads, and throw the bones of their mother behind them. For some time they were perplexed as to the meaning of the oracular command, but at length both agreed that by the bones of their mother were meant the stones of the earth. They accordingly took up stones from the mountain side and cast them over their shoulders. From those thrown by Deucalion there sprang up men, and from those thrown by Pyrrha, women.

After the lapse of time the theory of Autochthony (from autos, self, and chthon, earth) was laid aside. When this belief existed there were no religious teachers whatever; but in course of time temples were raised in honour of the different gods, and priests appointed to offer sacrifices to them and conduct their worship. These priests were looked upon as authorities in all religious matters, and the doctrine they taught was, that man had been created by the gods, and that there had been several successive ages of men, which were called the Golden, Silver, Brazen, and Iron Ages.

THE GOLDEN AGE
Life in the Golden Age was one unceasing round of ever-recurring pleasures unmarred by sorrow or care. The favoured mortals living at this happy time led pure and joyous lives, thinking no evil, and doing no wrong. The earth brought forth fruits and flowers without toil or labour in plentiful luxuriance, and war was unknown. This delightful and god-like existence lasted for hundreds of years, and when at length life on earth was ended, death laid his hand so gently upon them that they passed painlessly away in a happy dream, and continued their existence as ministering spirits in Hades, watching over and protecting those they had loved and left behind on earth. The men of the Silver Age were a long time growing up, and during their childhood, which lasted a hundred years, they suffered from ill-health and extreme debility. When they at last became men they lived but a short time, for they would not abstain from mutual injury, nor pay the service due to the gods, and were therefore banished to Hades. There, unlike the beings of the Golden Age, they exercised no beneficent supervision over the dear ones left behind, but wandered about as restless spirits, always sighing for the lost pleasures they had enjoyed in life.

THE BRAZEN AGE
The men of the Brazen Age were quite a different race of beings, being as strong and powerful as those of the Silver Age were weak and enervated. Everything which surrounded them was of brass; their arms, their tools, their dwellings, and all that they made. Their characters seem to have resembled the metal in which they delighted; their minds and hearts were hard, obdurate, and cruel. They led a life of strife and contention, introduced into the world, which had hitherto known nothing but peace and tranquillity, the scourge of war, and were in fact only happy when fighting and quarrelling with each other. Hitherto Themis, the goddess of Justice, had been living among mankind, but becoming disheartened at their evil doings, she abandoned the earth, and winged her flight back to heaven. At last the gods became so tired of their evil deeds and continual dissensions, that they removed them from the face of the earth, and sent them down to Hades to share the fate of their predecessors.

THE IRON AGE
We now come to the men of the Iron Age. The earth, no longer teeming with fruitfulness, only yielded her increase after much toil and labour. The goddess of Justice having abandoned mankind, no influence remained sufficiently powerful to preserve them from every kind of wickedness and sin. This condition grew worse as time went on, until at last Zeus in his anger let loose the water-courses from above, and drowned every individual of this evil race, except Deucalion and Pyrrha.

ORIGIN OF MAN – THEORY OF HESIOD
The theory of Hesiod, the oldest of all the Greek poets, was that the Titan Prometheus, the son of Iapetus, had formed man out of clay, and that Athene had breathed a soul into him. Full of love for the beings he had called into existence, Prometheus determined to elevate their minds and improve their condition in every way; he therefore taught them astronomy, mathematics, the alphabet, how to cure diseases, and the art of divination. He created this race in such great numbers that the gods began to see the necessity of instituting certain fixed laws with regard to the sacrifices due to them, and the worship to which they considered themselves entitled from mankind in return for the protection which they accorded them. An assembly was therefore convened at Mecone in order to settle these points. It was decided that Prometheus, as the advocate of man, should slay an ox, which should be divided into two equal parts, and that the gods should select one portion which should henceforth, in all future sacrifices, be set apart for them. Prometheus so divided the ox that one part consisted of the bones (which formed of course the least valuable portion of the animal), artfully concealed by the white fat; whilst the other contained all the edible parts, which he covered with the skin, and on the top of all he laid the stomach. 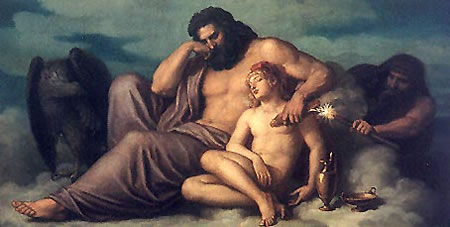 Zeus, pretending to be deceived, chose the heap of bones, but he saw through the stratagem, and was so angry at the deception practised on him by Prometheus that he avenged himself by refusing to mortals the gift of fire. Prometheus, however, resolved to brave the anger of the great ruler of Olympus, and to obtain from heaven the vital spark so necessary for the further progress and comfort of the human race. He accordingly contrived to steal some sparks from the chariot of the sun, which he conveyed to earth hidden in a hollow tube. Furious at being again outwitted, Zeus determined to be revenged first on mankind, and then on Prometheus. To punish the former he commanded Hephæstus (Vulcan) to mould a beautiful woman out of clay, and determined that through her instrumentality trouble and misery should be brought into the world.

The gods were so charmed with the graceful and artistic creation of Hephæstus, that they all determined to endow her with some special gift. Hermes bestowed on her a smooth persuasive tongue, Aphrodite gave her beauty and the art of pleasing; the Graces made her fascinating, and Athene gifted her with the possession of feminine accomplishments. She was called Pandora, which means all-gifted, having received every attribute necessary to make her charming and irresistible. Thus beautifully formed and endowed, this exquisite creature, attired by the Graces, and crowned with flowers by the Seasons, was conducted to the house of Epimetheus by Hermes the messenger of the gods. Now Epimetheus had been warned by his brother not to accept any gift whatever from the gods; but he was so fascinated by the beautiful being who suddenly appeared before him, that he welcomed her to his home, and made her his wife. It was not long, however, before he had cause to regret his weakness. 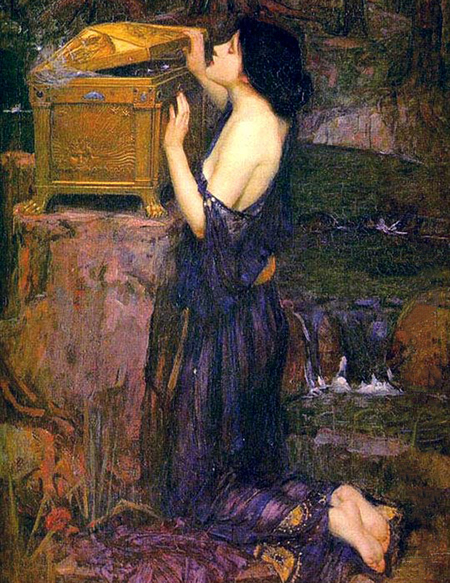 He had in his possession a jar of rare workmanship, containing all the blessings reserved by the gods for mankind, which he had been expressly forbidden to open. But woman’s proverbial curiosity could not withstand so great a temptation, and Pandora determined to solve the mystery at any cost. Watching her opportunity she raised the lid, and immediately all the blessings which the gods had thus reserved for mankind took wing and flew away. But all was not lost. Just as Hope (which lay at the bottom) was about to escape, Pandora hastily closed the lid of the jar, and thus preserved to man that never-failing solace which helps him to bear with courage the many ills which assail him.

Having punished mankind, Zeus determined to execute vengeance on Prometheus. He accordingly chained him to a rock in Mount Caucasus, and sent an eagle every day to gnaw away his liver, which grew again every night ready for fresh torments. For thirty years Prometheus endured this fearful punishment; but at length Zeus relented, and permitted his son Heracles to kill the eagle, and the sufferer was released.

Source: A HAND-BOOK OF MYTHOLOGY. THE Myths and Legends OF ANCIENT GREECE AND ROME. by E. M. BERENS.