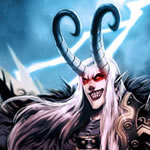 The Spirit of Evil

Besides the hideous giant Utgard-Loki, the personification of mischief and evil, whom Thor and his companions visited in Jötun-heim, the ancient Northern nations had another type of sin, whom they called Loki also.

In the beginning, Loki was merely the personification of the hearth fire and of the spirit of life. At first a god, he gradually becomes “god and devil combined,” and ends in being held in general detestation as an exact counterpart of the mediæval Lucifer, the prince of lies, “the originator of deceit, and the back-biter” of the Æsir.

By some authorities Loki was said to be the brother of Odin, but others assert that the two were not related, but had merely gone through the form of swearing blood brotherhood common in the North.

“Odin! dost thou remember
When we in early days
Blended our blood together?
When to taste beer
Thou did’st constantly refuse
Unless to both ’twas offered?”

While Thor is the embodiment of Northern activity, Loki represents recreation, and the close companionship early established between these two gods shows very plainly how soon our ancestors realised that both were necessary to the welfare of mankind. Thor is ever busy and ever in earnest, but Loki makes fun of everything, until at last his love of mischief leads him entirely astray, and he loses all love for goodness and becomes utterly selfish and malevolent.

He represents evil in the seductive and seemingly beautiful form in which it parades through the world. Because of this deceptive appearance the gods did not at first avoid him, but treated him as one of themselves in all good-fellowship, taking him with them wherever they went, and admitting him not only to their merry-makings, but also to their council hall, where, unfortunately, they too often listened to his advice.

Loki played a prominent part in the creation of man, endowing him with the power of motion, and causing the blood to circulate freely through his veins, whereby he was inspired with passions. As personification of fire as well as of mischief, Loki (lightning) is often seen with Thor (thunder), whom he accompanies to Jötun-heim to recover his hammer, to Utgard-Loki’s castle, and to Geirrod’s house. It is he who steals Freya’s necklace and Sif’s hair, and betrays Idun into the power of Thiassi; and although he sometimes gives the gods good advice and affords them real help, it is only to extricate them from some predicament into which he has rashly inveigled them. 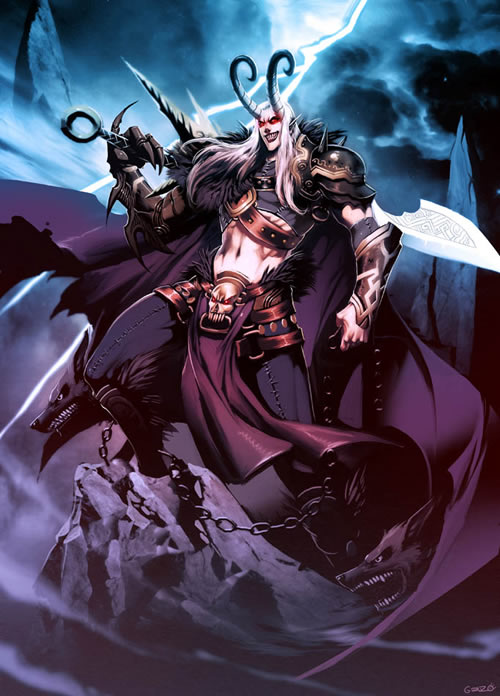 Some authorities declare that, instead of making part of the creative trilogy (Odin, Hoenir, and Lodur or Loki), this god originally belonged to a pre-Odinic race of deities, and was the son of the great giant Fornjotnr (Ymir), his brothers being Kari (air) and Hler (water), and his sister Ran, the terrible goddess of the sea. Other mythologists, however, make him the son of the giant Farbauti, who has been identified with Bergelmir, the sole survivor of the deluge, and of Laufeia (leafy isle) or Nal (vessel), his mother, thus stating that his connection with Odin was only that of the Northern oath of good-fellowship.

Loki (fire) first married Glut (glow), who bore him two daughters, Eisa (embers) and Einmyria (ashes); it is therefore very evident that Norsemen considered him emblematic of the hearth-fire, and when the flaming wood crackles on the hearth the goodwives in the North are still wont to say that Loki is beating his children. Besides this wife, Loki is also said to have wedded the giantess Angur-boda (the anguish-boding), who dwelt in Jötun-heim, and who, as we have already seen, bore him the three monsters: Hel, goddess of death, the Midgard snake Iörmungandr, and the grim wolf Fenris.

“Loki begat the wolf
With Angur-boda.”