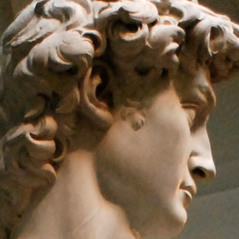 A far more important commission was intrusted to Michelangelo in August…1501. Condivi, after mentioning his return to Florence, tells the history of the colossal David in these words: “Here he stayed some time, and made the statue which stands in front of the great door of the Palace of the Signory, and is called the Giant by all people. It came about in this way. The Board of Works at S. Maria del Fiore owned a piece of marble nine cubits in height, which had been brought from Carrara some hundred years before by a sculptor insufficiently acquainted with his art. This was evident, inasmuch as, wishing to convey it more conveniently and with less labour, he had it blocked out in the quarry, but in such a manner that neither he nor any one else was capable of extracting a statue from the block, either of the same size, or even on a much smaller scale. The marble being, then, useless for any good purpose, Andrea del Monte San Savino thought that he might get possession of it from the Board, and begged them to make him a present of it, promising that he would add certain pieces of stone and carve a statue from it. Before they made up their minds to give it, they sent for Michelangelo; then, after explaining the wishes and the views of Andrea, and considering his own opinion that it would be possible to extract a good thing from the block, they finally offered it to him. Michelangelo accepted, added no pieces, and got the statue out so exactly, that, as any one may see, in the top of the head and at the base some vestiges of the rough surface of the marble still remain. He did the same in other works, as, for instance, in the Contemplative Life upon the tomb of Julius; indeed, it is a sign left by masters on their work, proving them to be absolute in their art. But in the David it was much more remarkable, for this reason, that the difficulty of the task was not overcome by adding pieces; and also he had to contend with an ill-shaped marble. As he used to say himself, it is impossible, or at least extraordinarily difficult in statuary to set right the faults of the blocking out. He received for this work 400 ducats, and carried it out in eighteen months.” 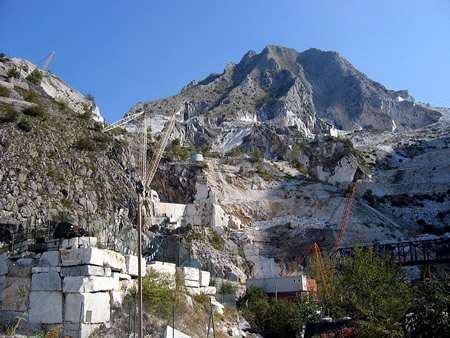 The sculptor who had spoiled this block of marble is called “Maestro Simone” by Vasari; but the abundant documents in our possession, by aid of which we are enabled to trace the whole history of Michelangelo’s David with minuteness, show that Vasari was misinformed. The real culprit was Agostino di Antonio di Duccio, or Guccio, who had succeeded with another colossal statue for the Duomo. He is honourably known in the history of Tuscan sculpture by his reliefs upon the façade of the Duomo at Modena, describing episodes in the life of S. Gemignano, by the romantically charming reliefs in marble, with terracotta settings, on the Oratory of S. Bernardino at Perugia, and by a large amount of excellent surface-work in stone upon the chapels of S. Francesco at Rimini. We gather from one of the contracts with Agostino that the marble was originally blocked out for some prophet. But Michelangelo resolved to make a David; and two wax models, now preserved in the Museo Buonarroti, neither of which corresponds exactly with the statue as it exists, show that he felt able to extract a colossal figure in various attitudes from the damaged block. In the first contract signed between the Consuls of the Arte della Lana, the Operai del Duomo, and the sculptor, dated August 16, 1501, the terms are thus settled: “That the worthy master Michelangelo, son of Lodovico Buonarroti, citizen of Florence, has been chosen to fashion, complete, and finish to perfection that male statue called the Giant, of nine cubits in height, now existing in the workshop of the cathedral, blocked out aforetime by Master Agostino of Florence, and badly blocked; and that the work shall be completed within the term of the next ensuing two years, dating from September, at a salary of six golden florins per month; and that what is needful for the accomplishment of this task, as workmen, timbers, &c., which he may require, shall be supplied him by the Operai; and when the statue is finished, the Consuls and Operai who shall be in office shall estimate whether he deserve a larger recompense, and this shall be left to their consciences.” 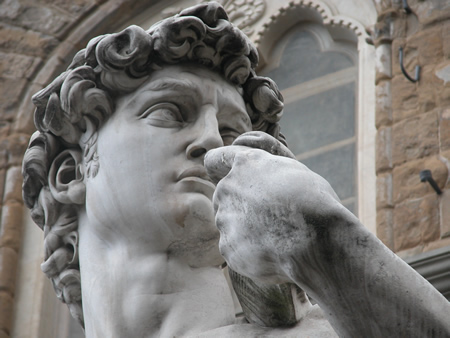 Copy of David by Michelangelo in the original location in front of Palazzo Vecchio (image:Robert Scarth http://commons.wikimedia.org/wiki/User:Robert_Scarth)

Michelangelo began to work on Monday morning, September 13, in a wooden shed erected for the purpose, not far from the cathedral. On the 28th of February 1502, the statue, which is now called for the first time “the Giant, or David,” was brought so far forward that the judges declared it to be half finished, and decided that the sculptor should be paid in all 400 golden florins, including the stipulated salary. He seems to have laboured assiduously during the next two years, for by a minute of the 25th of January 1504 the David is said to be almost entirely finished. On this date a solemn council of the most important artists resident in Florence was convened at the Opera del Duomo to consider where it should be placed. 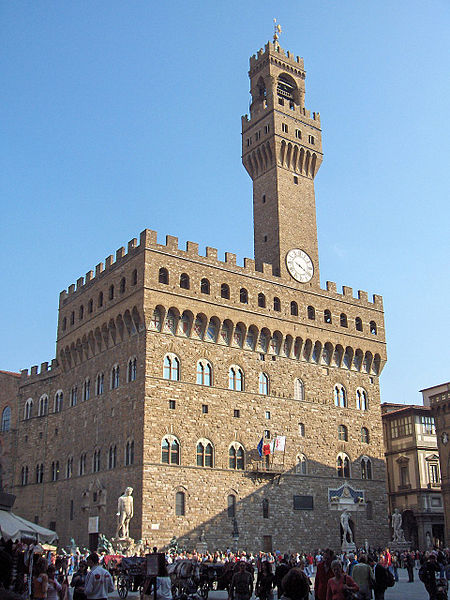 We possess full minutes of this meeting, and they are so curious that I shall not hesitate to give a somewhat detailed account of the proceedings. Messer Francesco Filarete, the chief herald of the Signory, and himself an architect of some pretensions, opened the discussion in a short speech to this effect: “I have turned over in my mind those suggestions which my judgment could afford me. You have two places where the statue may be set up: the first, that where the Judith stands; the second, in the middle of the courtyard where the David is. The first might be selected, because the Judith is an omen of evil, and no fit object where it stands, we having the cross and lily for our ensign; besides, it is not proper that the woman should kill the male; and, above all, this statue was erected under an evil constellation, since you have gone continually from bad to worse since then. Pisa has been lost too. The David of the courtyard is imperfect in the right leg; and so I should counsel you to put the Giant in one of these places, but I give the preference myself to that of the Judith.” The herald, it will be perceived, took for granted that Michelangelo’s David would be erected in the immediate neighbourhood of the Palazzo Vecchio. The next speaker, Francesco Monciatto, a wood-carver, advanced the view that it ought to be placed in front of the Duomo, where the Colossus was originally meant to be put up. He was immediately followed, and his resolution was seconded, by no less personages than the painters Cosimo Rosselli and Sandro Botticelli. Then Giuliano da San Gallo, the illustrious architect, submitted a third opinion to the meeting. He began his speech by observing that he agreed with those who wished to choose the steps of the Duomo, but due consideration caused him to alter his mind. “The imperfection of the marble, which is softened by exposure to the air, rendered the durability of the statue doubtful. He therefore voted for the middle of the Loggia dei Lanzi, where the David would be under cover.” Messer Angelo di Lorenzo Manfidi, second herald of the Signory, rose to state a professional objection. “The David, if erected under the middle arch of the Loggia, would break the order of the ceremonies practised there by the Signory and other magistrates. He therefore proposed that the arch facing the Palazzo (where Donatello’s Judith is now) should be chosen.” The three succeeding speakers, people of no great importance, gave their votes in favour of the chief herald’s resolution. Others followed San Gallo, among whom was the illustrious Lionardo da Vinci. He thought the statue could be placed under the middle arch of the Loggia without hindrance to ceremonies of state. Salvestro, a jeweller, and Filippino Lippi, the painter, were of opinion that the neighbourhood of the Palazzo should be adopted, but that the precise spot should be left to the sculptor’s choice. Gallieno, an embroiderer, and David Ghirlandajo, the painter, suggested a new place—namely, where the lion or Marzocco stood on the Piazza. Antonio da San Gallo, the architect, and Michelangelo, the goldsmith, father of Baccio Bandinelli, supported Giuliano da San Gallo’s motion. Then Giovanni Piffero—that is, the father of Benvenuto Cellini—brought the discussion back to the courtyard of the palace. He thought that in the Loggia the statue would be only partly seen, and that it would run risks of injury from scoundrels. Giovanni delle Corniole, the incomparable gem-cutter, who has left us the best portrait of Savonarola, voted with the two San Galli, “because he hears the stone is soft.” Piero di Cosimo, the painter, and teacher of Andrea del Sarto, wound up the speeches with a strong recommendation that the choice of the exact spot should be left to Michelangelo Buonarroti. This was eventually decided on, and he elected to have his David set up in the place preferred by the chief herald—that is to say, upon the steps of the Palazzo Vecchio, on the right side of the entrance.

Extract from The Life of MICHELANGELO BUONARROTI