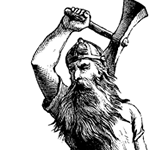 Thor was the proud possessor of a magic hammer called Miölnir (the crusher) which he hurled at his enemies, the frost-giants, with destructive power, and which possessed the wonderful property of always returning to his hand, however far away he might hurl it.

“I am the Thunderer!
Here in my Northland,
My fastness and fortress,
Reign I forever!

“Here amid icebergs
Rule I the nations;
This is my hammer,
Miölnir the mighty;
Giants and sorcerers
Cannot withstand it!”

As this huge hammer, the emblem of the thunderbolts, was generally red-hot, the god had an iron gauntlet called Iarn-greiper, which enabled him to grasp it firmly. He could hurl Miölnir a great distance, and his strength, which was always remarkable, was doubled when he wore his magic belt called Megin-giörd.

“This is my girdle:
Whenever I brace it,
Strength is redoubled!”

Thor’s hammer was considered so very sacred by the ancient Northern people, that they were wont to make the sign of the hammer, as the Christians later taught them to make the sign of the cross, to ward off all evil influences, and to secure blessings. The same sign was also made over the newly born infant when water was poured over its head and a name given. The hammer was used to drive in boundary stakes, which it was considered sacrilegious to remove, to hallow the threshold of a new house, to solemnise a marriage, and, lastly, it played a part in the consecration of the funeral pyre upon which the bodies of heroes, together with their weapons and steeds, and, in some cases, with their wives and dependents, were burned. 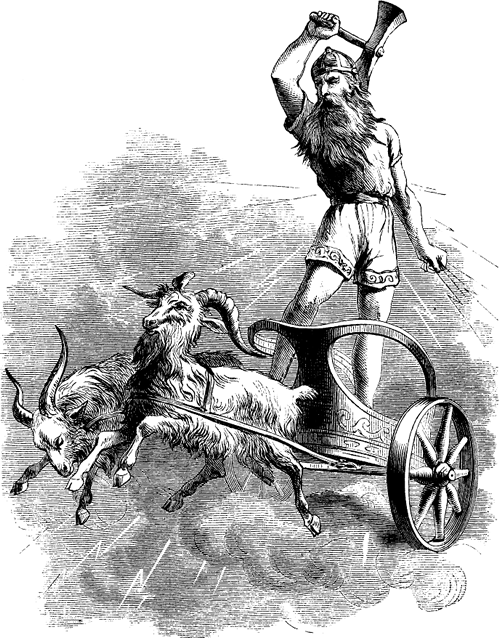 In Sweden, Thor, like Odin, was supposed to wear a broad-brimmed hat, and hence the storm-clouds in that country are known as Thor’s hat, a name also given to one of the principal mountains in Norway. The rumble and roar of the thunder were said to be the roll of his chariot, for he alone among the gods never rode on horseback, but walked, or drove in a brazen chariot drawn by two goats, Tanngniostr (tooth-cracker), and Tanngrisnr (tooth-gnasher), from whose teeth and hoofs the sparks constantly flew.

“Thou camest near the next, O warrior Thor!
Shouldering thy hammer, in thy chariot drawn,
Swaying the long-hair’d goats with silver’d rein.”

When the god thus drove from place to place, he was called Aku-thor, or Thor the charioteer, and in Southern Germany the people, fancying a brazen chariot alone inadequate to furnish all the noise they heard, declared it was loaded with copper kettles, which rattled and clashed, and therefore often called him, with disrespectful familiarity, the kettle-vendor.