Monkey Weapons in the Opium War 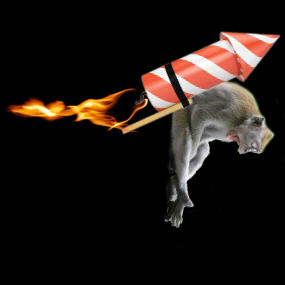 During the Opium War, the Chinese were trying to destroy English ships by using fire-rafts. On their first attempt, fear of being within range of the British warships’ guns led the Chinese to ignite the rafts when they were still approximately three miles away from their targets. With so much advance notice, the British were able to take the ships in tow and beach them – although several sailors were badly burned. A second round of fire rafts was launched, again prematurely, and shortly afterward the Chinese irregulars in charge fled when they were attacked by boats that had be put out from the English warships.

According to ‘The Opium War Through Chinese Eyes’ by The Arthur Waley Estate, ‘Someone suggested that fire-crackers should be tied to the backs of a number of monkeys, who would then be flung on board the English ships. The flames would spread rapidly in every direction and might with luck reach the powder-magazine, in which case the whole ship would blow up. Nineteen monkeys were bought, and at the time of the advance were brought in litters to the advanced base.’ The monkeys accompanied the retreating armies to Tz’u-ch’i when the Chinese attacks had failed. No one dared go near enough to the enemy ships to fling the monkeys on board, and so the plan was never executed.

The monkeys were put in the charge of a Mr. Feng in the town on the heights behind Tz’u-ch’i. When the townspeople fled after the defeat of the remaining Chinese troops, there was no one to care for the monkeys and they eventually died of starvation in Mr. Feng’s lodge.