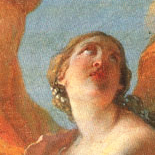 In addition to the seven immortal wives of Zeus, he was also allied to a number of mortal maidens whom he visited under various disguises, as it was supposed that if he revealed himself in his true form as king of heaven the splendour of his glory would cause instant destruction to mortals. The mortal consorts of Zeus have been such a favourite theme with poets, painters, and sculptors, that it is necessary to give some account of their individual history. Those best known are Antiope, Leda, Europa, Callisto, Alcmene, Semele, Io, and Danae.

ANTIOPE, to whom Zeus appeared under the form of a satyr, was the daughter of Nicteus, king of Thebes. To escape the anger of her father she fled to Sicyon, where king Epopeus, enraptured with her wonderful beauty, made her his wife without asking her father’s consent. This so enraged Nicteus that he declared war against Epopeus, in order to compel him to restore Antiope. At his death, which took place before he could succeed in his purpose, Nicteus left his kingdom to his brother Lycus, commanding him, at the same time, to carry on the war, and execute his vengeance. Lycus invaded Sicyon, defeated and killed Epopeus, and brought back Antiope as a prisoner. On the way to Thebes she gave birth to her twin-sons, Amphion and Zethus, who, by the orders of Lycus, were at once exposed on Mount Cithaeron, and would have perished but for the kindness of a shepherd, who took pity on them and preserved their lives. Antiope was, for many years, held captive by her uncle Lycus, and compelled to suffer the utmost cruelty at the hands of his wife Dirce. But one day her bonds were miraculously loosened, and she flew for shelter and protection to the humble dwelling of her sons on Mount Cithaeron. During the long period of their mother’s captivity the babes had grown into sturdy youths, and, as they listened angrily to the story of her wrongs, they became all impatience to avenge them. Setting off at once to Thebes they succeeded in possessing themselves of the town, and after slaying the cruel Lycus they bound Dirce by the hair to the horns of a wild bull, which dragged her hither and thither until she expired. Her mangled body was cast into the fount near Thebes, which still bears her name. Amphion became king of Thebes in his uncle’s stead. He was a friend of the Muses, and devoted to music and poetry. His brother, Zethus, was famous for his skill in archery, and was passionately fond of the chase. It is said that when Amphion wished to inclose the town of Thebes with walls and towers, he had but to play a sweet melody on the lyre, given to him by Hermes, and the huge stones began to move, and obediently fitted themselves together.

The punishment of Dirce at the hands of Amphion and Zethus forms the subject of the world-renowned marble group in the museum at Naples, known by the name of the Farnese Bull.

In sculpture Amphion is always represented with a lyre; Zethus with a club.

LEDA, whose affections Zeus won under the form of a swan, was the daughter of Thestius, king of Ætolia. Her twin-sons, Castor and (Polydeuces or) Pollux, were renowned for their tender attachment to each other. They were also famous for their physical accomplishments, Castor being the most expert charioteer of his day, and Pollux the first of pugilists. Their names appear both among the hunters of the Calydonian boar-hunt and the heroes of the Argonautic expedition. The brothers became attached to the daughters of Leucippus, prince of the Messenians, who had been betrothed by their father to Idas and Lynceus, sons of Aphareus. Having persuaded Leucippus to break his promise, the twins carried off the maidens as their brides. Idas and Lynceus, naturally furious at this proceeding, challenged the Dioscuri to mortal combat, in which Castor perished by the hand of Idas, and Lynceus by that of Pollux. Zeus wished to confer the gift of immortality upon Pollux, but he refused to accept it unless allowed to share it with Castor. Zeus gave the desired permission, and the faithful brothers were both allowed to live, but only on alternate days. The Dioscuri received divine honours throughout Greece, and were worshipped with special reverence at Sparta.

EUROPA was the beautiful daughter of Agenor, king of Phœnicia. She was one day gathering flowers with her companions in a meadow near the sea-shore, when Zeus, charmed with her great beauty, and wishing to win her love, transformed himself into a beautiful white bull, and trotted quietly up to the princess, so as not to alarm her. Surprised at the gentleness of the animal, and admiring its beauty, as it lay placidly on the grass, she caressed it, crowned it with flowers, and, at last, playfully seated herself on its back. Hardly had she done so than the disguised god bounded away with his lovely burden, and swam across the sea with her to the island of Crete.

Europa was the mother of Minos, Aeacus, and Rhadamanthus. Minos, who became king of Crete, was celebrated for his justice and moderation, and after death he was created one of the judges of the lower world, which office he held in conjunction with his brothers.

CALLISTO, the daughter of Lycaon, king of Arcadia, was a huntress in the train of Artemis, devoted to the pleasures of the chase, who had made a vow never to marry; but Zeus, under the form of the huntress-goddess, succeeded in obtaining her affections. Hera, being extremely jealous of her, changed her into a bear, and caused Artemis (who failed to recognize her attendant under this form) to hunt her in the chase, and put an end to her existence. After her death she was placed by Zeus among the stars as a constellation, under the name of Arctos, or the bear.

ALCMENE, the daughter of Electryon, king of Mycenae, was betrothed to her cousin Amphytrion; but, during his absence on a perilous undertaking, Zeus assumed his form, and obtained her affections. Heracles (whose world-renowned exploits will be related among the legends) was the son of Alcmene and Zeus.

SEMELE, a beautiful princess, the daughter of Cadmus, king of Phœnicia, was greatly beloved by Zeus. Like the unfortunate Callisto, she was hated by Hera with jealous malignity, and the haughty queen of heaven determined to effect her destruction. Disguising herself, therefore, as Berœ, Semele’s faithful old nurse, she artfully persuaded her to insist upon Zeus visiting her, as he appeared to Hera, in all his power and glory, well knowing that this would cause her instant death. Semele, suspecting no treachery, followed the advice of her supposed nurse; and the next time Zeus came to her, she earnestly entreated him to grant the favour she was about to ask. Zeus swore by the Styx (which was to the gods an irrevocable oath) to accede to her request whatsoever it might be. Semele, therefore, secure of gaining her petition, begged of Zeus to appear to her in all the glory of his divine power and majesty. As he had sworn to grant whatever she asked of him, he was compelled to comply with her wish; he therefore revealed himself as the mighty lord of the universe, accompanied by thunder and lightning, and she was instantly consumed in the flames.

IO, daughter of Inachus, king of Argos, was a priestess of Hera. She was very beautiful, and Zeus, who was much attached to her, transformed her into a white cow, in order to defeat the jealous intrigues of Hera, who, however, was not to be deceived. Aware of the stratagem, she contrived to obtain the animal from Zeus, and placed her under the watchful care of a man called Argus-Panoptes, who fastened her to an olive-tree in the grove of Hera. He had a hundred eyes, of which, when asleep, he never closed more than two at a time; being thus always on the watch, Hera found him extremely useful in keeping guard over Io. Hermes, however, by the command of Zeus, succeeded in putting all his eyes to sleep with the sound of his magic lyre, and then, taking advantage of his helpless condition, slew him. The story goes, that in commemoration of the services which Argus had rendered her, Hera placed his eyes on the tail of a peacock, as a lasting memorial of her gratitude. Ever fertile in resource, Hera now sent a gadfly to worry and torment the unfortunate Io incessantly, and she wandered all over the world in hopes of escaping from her tormentor. At length she reached Egypt, where she found rest and freedom from the persecutions of her enemy. On the banks of the Nile she resumed her original form and gave birth to a son called Epaphus, who afterwards became king of Egypt, and built the famous city of Memphis.

DANAE.—Zeus appeared to Danae under the form of a shower of gold. (Further details concerning her will be found in the legend of Perseus.)

Source: A HAND-BOOK OF MYTHOLOGY. THE Myths and Legends OF ANCIENT GREECE AND ROME. by E. M. BERENS.