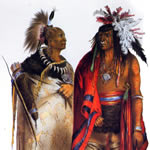 The Nanfan Treaty or The Deed from the Five Nations to the King, of their Beaver Hunting Ground, was an agreement reached in Albany, New York on July 19, 1701, between John Nanfan and representatives of the Iroquois Confederacy. Nanfan was acting on behalf of the The Crown as colonial governor of New York. The Five Nations, which would subsequently became the ‘Six Nations’, granted the English crown title to land that the Five Nations had claimed as a hunting ground by right of conquest during the later Beaver Wars of the 17th century. The land extended from the present-day Midwestern United States into southern Ontario. 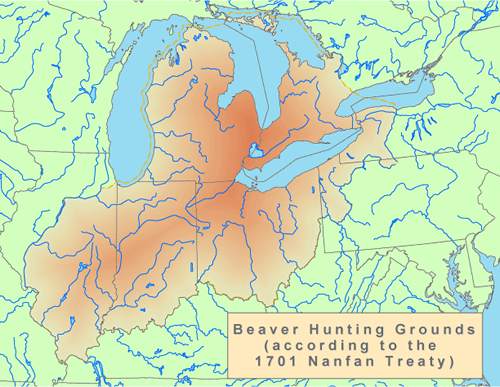 Beaver Hunting Grounds according to the 1701 Nanfan Treaty

The treaty was not recognized by the French, since the majority of the Beaver Hunting Grounds were also claimed by New France or its Algonquian Indian allies. Consequently, the English did not attempt, during this time period, to settle the region. The treaty was amended September 14, 1726 to reserve a 60 mile wide strip of land adjoining Lakes Erie and Ontario for occupation and use by the ‘Six Nations’. This permission was granted by the King of Great Britain, who was the landowner based on the 1701 agreement.

A “Deed from the Five Nations to the King, of their Beaver Hunting Ground,” made at Albany, New York, July 19, 1701. This, which is somewhat peculiar, is as follows: