P’an Ku – Creator of the Universe 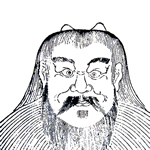 The most conspicuous figure in Chinese cosmogony is P’an Ku. He it was who chiselled the universe out of Chaos. According to Chinese ideas, he was the offspring of the original dual powers of Nature, the yin and the yang, which, having in some incomprehensible way produced him, set him the task of giving form to Chaos and “making the heavens and the earth.”

Some accounts describe him as the actual creator of the universe—“the ancestor of Heaven and earth and all that live and move and have their being.” ‘P’an’ means ‘the shell of an egg,’ and ‘Ku’ ‘to secure,’ ‘solid,’ referring to P’an Ku being hatched from out of Chaos and to his settling the arrangement of the causes to which his origin was due. The characters themselves may, however, mean nothing more than ‘Researches into antiquity,’ though some bolder translators have assigned to them the significance if not the literal sense of ‘aboriginal abyss,’ or the Babylonian Tiamat, ‘the Deep.’ 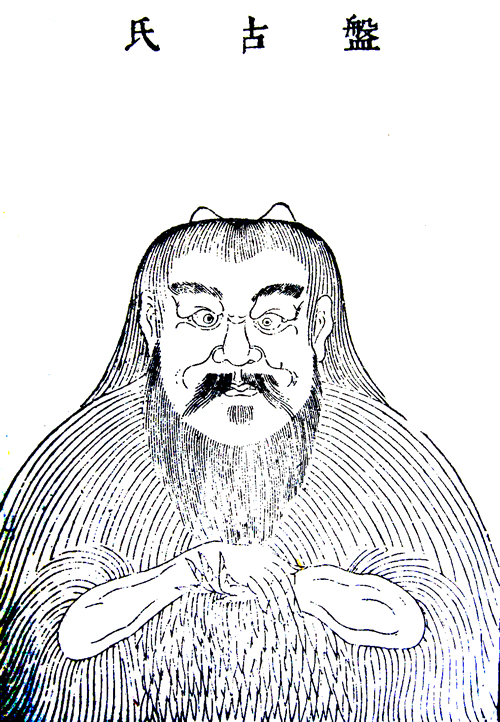 P’an Ku is pictured as a man of dwarfish stature clothed in bearskin, or merely in leaves or with an apron of leaves. He has two horns on his head. In his right hand he holds a hammer and in his left a chisel (sometimes these are reversed), the only implements he used in carrying out his great task. Other pictures show him attended in his labors by the four supernatural creatures—the unicorn, phoenix, tortoise, and dragon; others again with the sun in one hand and the moon in the other, some of the firstfruits of his stupendous labors. His task occupied eighteen thousand years, during which he formed the sun, moon, and stars, the heavens and the earth, himself increasing in stature day by day, being daily six feet taller than the day before, until, his labors ended, he died that his works might live. His head became the mountains, his breath the wind and clouds, his voice the thunder, his limbs the four quarters of the earth, his blood the rivers, his flesh the soil, his beard the constellations, his skin and hair the herbs and trees, his teeth, bones, and marrow the metals, rocks, and precious stones, his sweat the rain, and the insects creeping over his body human beings, who thus had a lowlier origin even than the tears of Khepera in Egyptian cosmology.

This account of P’an Ku and his achievements is of Taoist origin. The Buddhists have given a somewhat different account of him, which is a late adaptation from the Taoist myth, and must not be mistaken for Buddhist cosmogony proper.

The Sun and the Moon
In some of the pictures of P’an Ku he is represented, as already noted, as holding the sun in one hand and the moon in the other. Sometimes they are in the form of those bodies, sometimes in the classic character. The legend says that when P’an Ku put things in order in the lower world, he did not put these two luminaries in their proper courses, so they retired into the Han Sea, and the people dwelt in darkness. The Terrestrial Emperor sent an officer, Terrestrial Time, with orders that they should come forth and take their places in the heavens and give the world day and night. They refused to obey the order. They were reported to Ju Lai; P’an Ku was called, and, at the divine direction of Buddha, wrote the character for ‘sun’ in his left hand, and that for ‘moon’ in his right hand; and went to the Han Sea, and stretched forth his left hand and called the sun, and then stretched forth his right hand and called the moon, at the same time repeating a charm devoutly seven times; and they forthwith ascended on high, and separated time into day and night.

Other legends recount that P’an Ku had the head of a dragon and the body of a serpent; and that by breathing he caused the wind, by opening his eyes he created day, his voice made the thunder, etc.

P’an Ku and Ymer
Thus we have the heavens and the earth fashioned by this wonderful being in eighteen thousand years. With regard to him we may adapt the Scandinavian ballad:

It was Time’s morning
When P’an Ku lived;
There was no sand, no sea,
Nor cooling billows;

Earth there was none,
No lofty Heaven;
No spot of living green;
Only a deep profound.

And it is interesting to note, in passing, the similarity between this Chinese artificer of the universe and Ymer, the giant, who discharges the same functions in Scandinavian mythology. Though P’an Ku did not have the same kind of birth nor meet with the violent death of the latter, the results as regards the origin of the universe seem to have been pretty much the same.