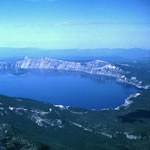 I camped one year by Crater Lake, in the State of Oregon,
And there I met a pioneer who lived by trap and gun.

And often of an evening by the camp fire’s ruddy light,
He told me how the West was made and of great men of might.

He told of the two Joe McFraus, the one whose name was Pete,
And how he labored for his board to get enough to eat.

And also of the Terrible Swede who gloried in a brawl,
One day he fought the riot squad and licked them one and all.

But master of the mighty men he loved to tell the best,
The tales of old Paul Bunyan and how he built the West.

He told of how he built the Sound, and how once on a spree
He dug the Strait of Bering to drain the Arctic Sea.

And how he split the old Cascades, and, by the way, said he,
“That reminds me of this very lake and how it came to be.”

And so he smoked of my cigars and sampled my home brew,
And told the tale about the lake and swore that it was true.

He said it was the very time when Bunyan pulled in two
The Cascade Mountains and thus let the Columbia River through;

He said the Blue Ox braced his feet and came within a dime
Of pulling California loose from its sunny clime.

And he swore ’twas true as gospel, that day the “Native Son”
Had first come down from out the trees to see what could be done.

Well, Bunyan listened to their wail, and checked his ox of blue,
Then staking down the southern end had pulled the range in two.

Then when he finished up his job he just pulled up the stake,
And water ran into the hole and there was Crater Lake.

Now you can take this tale or not, he swore that it was true,
And I don’t think he’d lie to me while drinking my home brew. 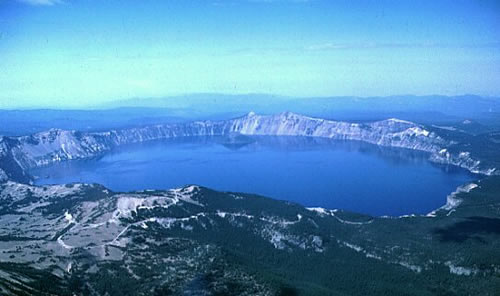 Crater Lake - Made when Paul Bunyan pulled up a stake and the water rushed in.

SOURCE:Paul Bunyan and His Loggers by Otis T. and Cloice R. Howd