For more than two hundred years during the Middle Ages the Christian countries of Europe were attacked on the southwest by the Saracens of Spain, and on the northwest by the Norsemen, or Northmen. The Northmen were so called because they came into Middle Europe from the north. Sometimes they were called Vikings, or pirates, because they were adventurous sea-robbers who plundered all countries which they could reach by sea.

Their ships were long and swift. In the center was placed a single mast, which carried one large sail. For the most part, however, the Norsemen depended on rowing, not on the wind, and sometimes there were twenty rowers in one vessel. 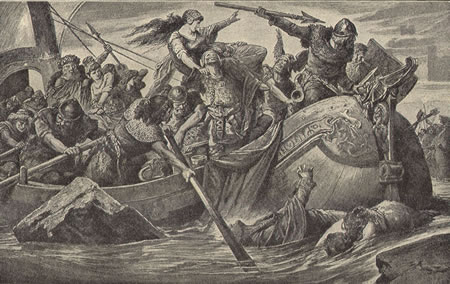 The Vikings were a terror to all their neighbors; but the two regions that suffered most from their attacks were the Island of Britain and that part of Charlemagne’s empire in which the Franks were settled. Nearly fifty times in two hundred years the lands of the Franks were invaded. The Vikings sailed up the large rivers into the heart of the region which we now call France and captured and pillaged cities and towns. Some years after Charlemagne’s death they went as far as his capital, Aix, took the place, and stabled their horses in the cathedral which the great emperor had built.

In the year 860 they discovered Iceland and made a settlement upon its shores. A few years later they sailed as far as Greenland, and there established settlements which existed for about a century. These Vikings were the first discoverers of the American continent. Ancient books found in Iceland tell the story of the discovery. It is related that a Viking ship was driven during a storm to a strange coast, which is thought to have been that part of America now known as Labrador. When the captain of the ship returned home he told what he had seen. His tale so excited the curiosity of a young Viking prince, called Leif the Lucky, that he sailed to the newly discovered coast. 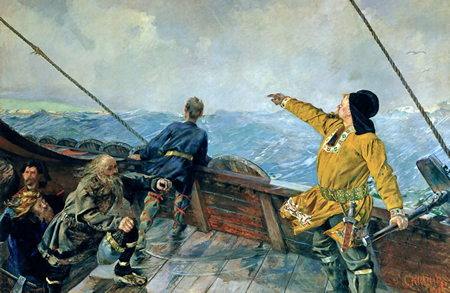 Going ashore, he found that the country abounded in wild grapes; and so he called it Vinland, or the land of Vines. Vinland is thought to have been a part of what is now the Rhode Island coast. The Vikings were not aware that they had found a great unknown continent. No one in the more civilized parts of Europe knew anything about their discovery; and after a while the story of the Vinland voyages seems to have been forgotten, even among the Vikings themselves. So it is not to them that we owe the discovery of America, but to Columbus; because his discovery, though nearly five hundred years later than that of the Norsemen, actually made known to all Europe, for all time, the existence of the New World.

The Vikings had many able chieftains. One of the most famous was Rollo the Walker, so called because he was such a giant that no horse strong enough to carry him could be found, and therefore he always had to walk. However, he did on foot what few could do on horseback.

In 885 seven hundred ships, commanded by Rollo and other Viking chiefs, left the harbors of Norway, sailed to the mouth of the Seine, and started up the river to capture the city of Paris. Rollo and his men stopped on the way at Rouen, which also was on the Seine, but nearer its mouth. The citizens had heard of the giant, and when they saw the river covered by his fleet they were dismayed. However, the bishop of Rouen told them that Rollo could be as noble and generous as he was fierce; and he advised them to open their gates and trust to the mercy of the Viking chief. This was done, and Rollo marched into Rouen and took possession of it. The bishop had given good advice, for Rollo treated the people very kindly. Soon after capturing Rouen he left the place, sailed up the river to Paris, and joined the other Viking chiefs. And now for six long miles the beautiful Seine was covered with Viking vessels, which carried an army of thirty thousand men.

A noted warrior named Eudes was Count of Paris, and he had advised the Parisians to fortify the city. So not long before the arrival of Rollo and his companions, two walls with strong gates had been built around Paris. It was no easy task for even Vikings to capture a strongly walled city. We are told that Rollo and his men built a high tower and rolled it on wheels up to the walls. At its top was a floor well manned with soldiers. But the people within the city shot hundreds of arrows at the besiegers, and threw down rocks, or poured boiling oil and pitch upon them. The Vikings thought to starve the Parisians, and for thirteen months they encamped around the city. At length food became very scarce, and Count Eudes determined to go for help. He went out through one of the gates on a dark, stormy night, and rode post-haste to the king. He told him that something must be done to save the people of Paris.

So the king gathered an army and marched to the city. No battle was fought—the Vikings seemed to have been afraid to risk one. They gave up the siege, and Paris was relieved. Rollo and his men went to the Duchy of Burgundy, where, as now, the finest crops were raised and the best of wines were made. Perhaps after a time Rollo and his Vikings went home; but we do not know what he did for about twenty-five years. We do know that he abandoned his old home in Norway in 911. Then he and his people sailed from the icy shore of Norway and again went up the Seine in hundreds of Viking vessels.

Of course, on arriving in the land of the Franks, Rollo at once began to plunder towns and farms. Charles, then king of the Franks, although his people called him the Simple, or Senseless, had sense enough to see that this must be stopped. So he sent a message to Rollo and proposed that they should have a talk about peace. Rollo agreed and accordingly they met. The king and his troops stood on one side of a little river, and Rollo with his Vikings stood on the other. Messages passed between them. The king asked Rollo what he wanted. “Let me and my people live in the land of the Franks; let us make ourselves home here, and I and my Vikings will become your vassals,” answered Rollo. He asked for Rouen and the neighboring land. So the king gave him that part of Francia; and ever since it has been called Normandy, the land of the Northmen.

When it was decided that the Vikings should settle in Francia and be subjects of the Frankish king, Rollo was told that he must kiss the foot of Charles in token that he would be the king’s vassal. The haughty Viking refused. “Never,” said he, “will I bend my knee before any man, and no man’s foot will I kiss.” After some persuasion, however, he ordered one of his men to perform the act of homage for him. The king was on horseback and the Norseman, standing by the side of the horse, suddenly seized the king’s foot and drew it up to his lips. This almost made the king fall from his horse, to the great amusement of the Norsemen.

Becoming a vassal to the king meant that if the king went to war Rollo would be obliged to join his army and bring a certain number of armed men—one thousand or more. Rollo now granted parts of Normandy to his leading men on condition that they would bring soldiers to his army and fight under him. They became his vassals, as he was the king’s vassal. The lands granted to vassals in this way were called feuds, and this plan of holding lands was called the Feudal System. It was established in every country of Europe during the Middle Ages.

The poorest people were called serfs. They were almost slaves and were never permitted to leave the estate to which they belonged. They did all the work. They worked chiefly for the landlords, but partly for themselves. Having been a robber himself, Rollo knew what a shocking thing it was to ravage and plunder, and he determined to change his people’s habits. He made strict laws and hanged robbers. His duchy thus became one of the safest parts of Europe. The Northmen learned the language of the Franks and adopted their religion.