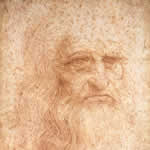 Leonardo Da Vinci, the multi-faceted genius of the Italian Renaissance was from, as his name implies, the little town of Vinci. The origins of Vinci go back to the Etruscans. It lies about six miles from Empoli and twenty miles west of Florence. Leonardo’s traditional birthplace home on the outskirts of the town in Anchiano still exists. The home underwent a $1.5 million restoration project which was completed in late June 2012.

Leonardo di Ser Piero d’Antonio di Ser Piero di Ser Guido Da Vinci, (his full legal name) was the natural and first-born son of Ser Piero, a country notary. Ser Piero’s father, grandfather, and great-grandfather, were notaries of distinction and Ser Piero was subsequently appointed notary to the Signoria of Florence. Leonardo’s mother was one Caterina, who afterwards married Acchattabriga di Piero del Vaccha of Vinci. According to recent discoveries, Caterina may have been a former slave. Ser Piero’s wealthy banker friend Vanni di Niccolo di Ser Vanni owned a slave named Caterina. This was not uncommon in Florence at the time. At the time of Leonardo’s birth, there were more than 550 slaves in the city, mostly from the Middle East and the Balkans. When Ser Piero’s friend Vanni died, he left Ser Piero as the executor of the will and heir to his house in Via Ghibellina. He left the slave girl to his wife Agnola. However, after 1451 there is no information about the slave girl, while it is known that Agnola continued to live in the home inherited by Ser Piero. Speculation is that Ser Piero allowed Agnola to remain in the home in exchange for the freedom of Caterina the slave.

Not long after this, Leonardo was born April 15, 1452 to a woman named Caterina. Leonardo’s father Ser Piero, who afterwards married four times, had eleven children by his third and fourth wives.