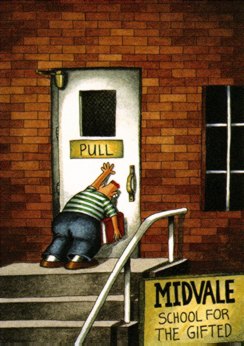 The Far Side first appeared in newspapers on January 1, 1980 and ran for fifteen years, it’s last appearance being on January 1, 1995. All 23 Far Side compilation books were on The New York Times Best Seller list. The single-panel cartoon was created by Gary Larson who originally worked in a music store. Bored at work, he picked up a pencil and began to draw cartoons. He sold the first six panels to a local magazine. He created additional cartoons that he then sold to the Seattle Times, and was eventually syndicated through the San Francisco Chronicle. His cartoons caused the reader to look at everyday things in a bizarre, hilarious way.

Perhaps Larson’s most well-known cartoon depicts something we all can relate to – pushing on a door that clearly says ‘Pull’. This classic cartoon appeared on mugs, t-shirts, and was pinned to many office cork boards.

His book The Prehistory of The Far Side gave insights into some of the comments Larson received from readers as well as some insights into his thought process for creating the cartoons. One particular cartoon he discusses shows God playing a Jeopardy-like game show (hopefully, for Larson’s sake, God has a sense of humor). Of this cartoon Larson said, “First, I made God look the way I think most of us are pretty sure he looks. Secondly, I made sure he was really winning hands down. Even if Norman had only ten points it would have meant that he beat God to the buzzer at least once, and someone would have gotten mad.”*

*Larson, Gary. The Prehistory of the Far Side. Universal Press, 1989. 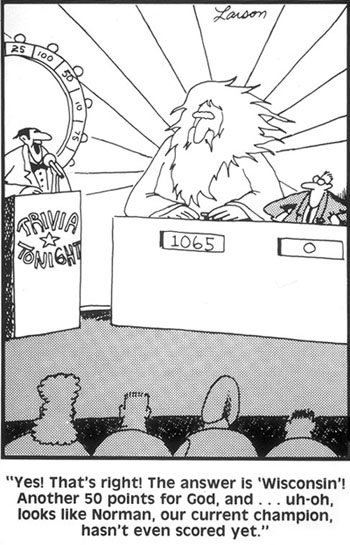