The Forum of Julius Caesar 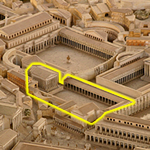 The Forum Iulium was the first of the so‑called imperial fora, begun by Julius Caesar and designed, not for a market, but to provide a centre for business of other kinds. The plan of this forum had been conceived as early as 54 B.C., for in that year Cicero and Oppius engaged in purchasing land for Caesar from private owners, and had already paid sixty million sesterces. More land was acquired afterwards, and the final cost is said to have been one hundred million sesterces, a sum perhaps exaggerated. 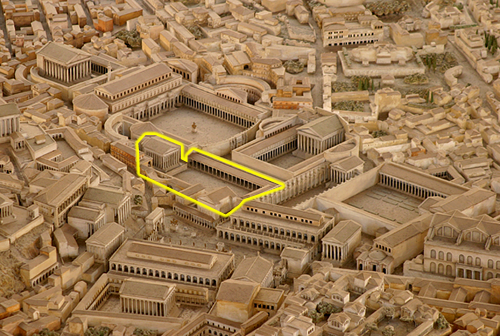 Work was probably begun in 51, during Caesar’s absence in Gaul. At the battle of Pharsalus Caesar vowed a temple to Venus Genetrix, the mythical ancestress of the Julian gens, and proceeded to build it in the centre of his forum, which thus became in effect a porticus surrounding the temple, a type followed in all the later fora. Temple and forum were dedicated on the last day of Caesar’s great triumph, 26th September, 46 B.C., although the forum was not finished by Caesar, but by Octavianus after the dictator’s death. In the forum Caesar allowed the erection of a statue of himself wearing a cuirass, and he himself dedicated a statue of his horse with ‘humanis similes pedes priores’, on which the dictator was mounted. In front of the temple stood a fountain surrounded by nymphs, called Appiades. The forum was burned in 283 A.D. and restored by Diocletian. While the official designation was forum Iulium it appears regularly in our sources as forum Caesaris. 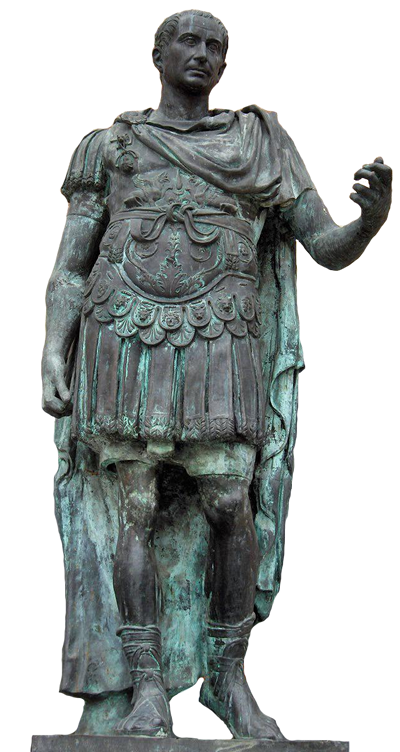 The temple of Venus was pycnostyle and built of solid marble. The statue of Venus Genetrix by Arcesilas, which Caesar set up, in foro Caesaris, was probably in the cella of the temple. Caesar also placed in the temple two paintings by Timomachus, Ajax and Medea; a gilded statue of Cleopatra; six dactyliothecae or collections of engraved gems; and a thorax adorned with British pearl. Later, Augustus is stated to have set up in the temple a statue of the deified Julius with a star above his head, although some scholars believe that this is a mistake for the temple of divus Iulius in the forum.

A colossal statue was erected near the temple in honour of Tiberius by fourteen cities of Asia Minor which had been relieved by him after the earthquakes of 17 and 23 A.D., with personifications of them on its base: and a copy of this in relief was found at Puteoli.

A statue of Drusilla was erected in the temple after her death.

The Forum of Julius Caesar

The forum Iulium was rectangular, about 115 metres long and 30 wide, surrounded by a colonnade and wall. Its main axis ran north-west to south-east, corresponding with that of the curia Iulia which adjoined it at the south corner. On this axis the temple was built, facing south-east. All that remains of the forum is part of the enclosure wall of peperino on the south-west side (Via delle Marmorelle 29), 12 metres high and 3.70 thick, and some small vaulted chambers or tabernae opening into the corridor of the forum through a row of peperino arches with Anio tufa piers and travertine imposts. Of the temple of Venus, excavations in the sixteenth century brought to light portions of the foundations of peperino and travertine, and fragments of columns and frieze. At this time Palladio and Labacco drew a plan and reconstruction from what was then visible, representing a peripteral octostyle structure with very narrow intercolumniations. A piece of the architrave still exists in the Villa Medici.