The Temple of Peace 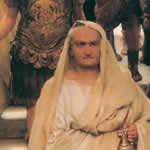 The temple of Peace was begun by Vespasian after the capture of Jerusalem in 71 A.D., and dedicated in 75. It stood in the middle of the forum Pacis, north of the basilica Aemilia, probably at the junction of the modern Vie Alessandrina and dei Pozzi. Statius seems to ascribe the completion of this temple to Domitian, but this emperor’s claim may have had little foundation. Within the temple, or attached closely to it, was a library, bibliotheca Pacis. In it were placed many of the treasures brought by Vespasian from Jerusalem, as well as famous works of Greek artists, and Pliny speaks of it, the basilica Aemilia and the forum of Augustus, as the three most beautiful monuments in Rome. 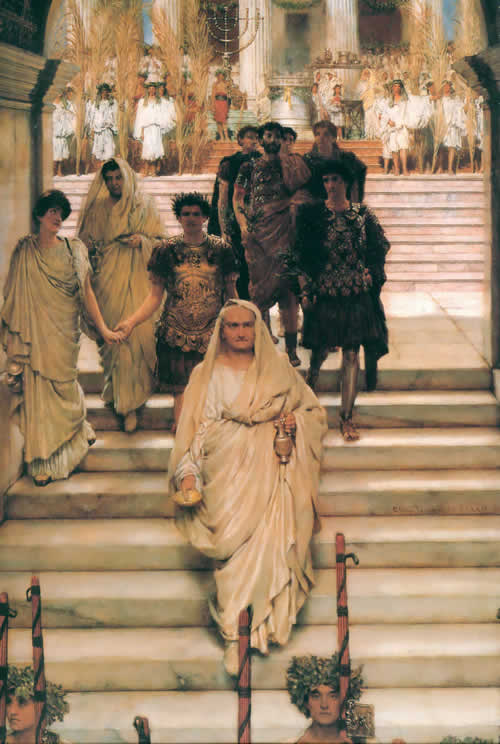 Titus returning to Rome in triumph following his capture of Jerusalem in AD 70. His father, the Emperor Vespasian, clad in a white toga, leads the procession. Titus comes next, holding the hand of his daughter, Julia, who turns to address her father's younger brother and successor, Domitian. In the background is the Temple of Jupiter Victor. Among the spoils from Jerusalem is a 7-branched candlestick from the temple.

Just before the death of Commodus, probably in 191, the temple was destroyed by fire, but it must have been restored, probably by Severus, for it is mentioned in the succeeding centuries as one of the most magnificent buildings in the city. It gave its name to the fourth region of the city. In 408 there were seismic disturbances for seven successive days in the forum Pacis, and the temple may have been injured then. At any rate Procopius, writing in the sixth century, says that it had long since been destroyed by lightning, although there were still many works of art set up in the immediate vicinity.

The Forum of Peace and other Imperial Fora

The enclosure within which the temple stood is not called forum in literature until after the time of Constantine. Enclosure and temple together appear in Pliny as Pacis opera. On the north-west it adjoined the (later) forum Transitorium, and on the south-east the basilica of Constantine, being rectangular in shape with the same orientation as the other imperial fora. Its length was 145 metres, and its width about two-thirds as much, although its north-east boundary is uncertain. It had an enclosing wall of peperino lined with marble and pierced with several gates. The peperino blocks have left impressions on the concrete of the basilica of Constantine, the north-west side of which was set against it. At the south-east corner there was an entrance from the Sacra via through a monumental passage which, after several changes, is now the church of SS. Cosma e Damiano. Further investigations have led to the conclusion that the rectangular building in opus quadratum was the temple of the Penates as restored by Augustus. In the time of Severus a wall was built across the north-east end of this entrance, and on its north-east side, towards the forum, on a facing of marble slabs, was placed the so‑called Capitoline Plan of the city, Forma Urbis Romae (click here to learn more about the Forma Urbis Romae), the fragments of which were first discovered in May and June 1562. A facsimile is fixed to the wall of the garden of the Palazzo dei Conservatori. Maxentius in any case added the round building, with its façade on the Sacra via. 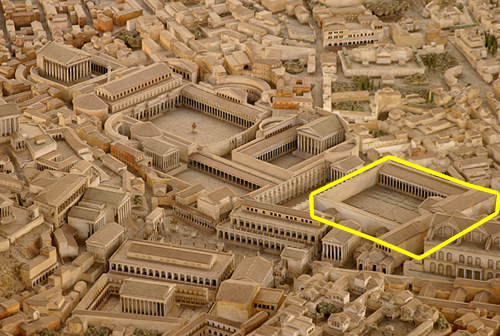 Reconstruction of the Forum of Peace

The history of the forum Pacis is that of the templum, and apart from the entrance just described, scarcely any traces of either have been found except a portion of the pavement of giallo antico and pavonazzetto of the southern angle of the formº ten metres below the present level of the Via del Tempio della Pace. 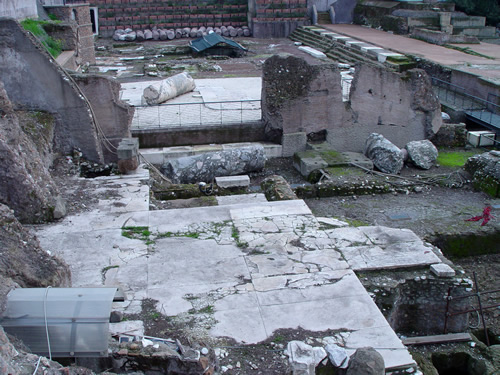 Ruins on the site of the Temple of Peace

Josephus had the following to say about the Temple of Peace:

“When the triumphal ceremonies were over, as the Roman empire was now firmly established, Vespasian made up his mind to build a temple of Peace. This was completed with remarkable speed and surpassed all human imagination. Not only did he have unlimited wealth at his disposal; he also adorned it with paintings and statues by the greatest of the old masters. In fact, in that temple were collected and deposited all those works that men had hitherto travelled over the whole world to see, longing to set eyes on them even when scattered in different lands. There too he laid up the golden vessels from the Temple of the Jews, for he prided himself on them; but their Law and the crimson curtains of the Inner Sanctuary he ordered to be deposited in the Palace for safe keeping.”

By the sixth century, Procopius could relate that cattle were to be found in the forum.

“for in that place has been situated from ancient times the temple of Peace, which was struck by lightning. And there is a certain ancient fountain before this forum, and a bronze bull stands by it, the work, I think, of Pheidias the Athenian or of Lysippus. For there are many statues in this quarter which are the works of these two men. Here, for example, is another statue which is certainly the work of Pheidias; for the inscription the statue says this. There too is the calf of Myron. For the ancient Romans took great pains to make all the finest things of Greece adornments of Rome” (Gothic War, VIII.21.11-14).