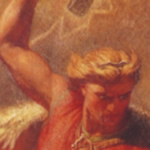 According to some mythologists, Thor, or Donar, is the son of Jörd (Erda) and of Odin, but others state that his mother was Frigga, queen of the gods. This child was very remarkable for his great size and strength, and very soon after his birth amazed the assembled gods by playfully lifting and throwing about ten great bales of bear skins. Although generally good-tempered, Thor would occasionally fly into a terrible rage, and as he was very dangerous at these times, his mother, unable to control him, sent him away from home and entrusted him to the care of Vingnir (the winged), and of Hlora (heat). These foster-parents, who are also considered as the personification of sheet-lightning, soon managed to control their troublesome charge, and brought him up so wisely, that the gods entertained a very grateful recollection of their kind offices. Thor himself, recognizing all he owed them, assumed the names of Vingthor and Hlorridi, by which he is also known.

“Cry on, Vingi-Thor,
With the dancing of the ring-mail and the smitten shields of war.”

Having attained his full growth and the age of reason, Thor was admitted to Asgard among the other gods, where he occupied one of the twelve seats in the great judgment hall. He was also given the realm of Thrud-vang or Thrud-heim, where he built a wonderful palace called Bilskirnir (lightning), the most spacious in all Asgard. It contained five hundred and forty halls for the accommodation of the thralls, who after death were welcomed to his home, where they received equal treatment with their masters in Valhalla, for Thor was the patron god of the peasants and lower classes.

As he was god of thunder, Thor alone was never allowed to pass over the wonderful bridge Bifröst, lest he should set it aflame by the heat of his presence; and when he wished to join his fellow gods by the Urdar fountain, under the shade of the sacred tree Yggdrasil, he was forced to make his way thither on foot, wading through the rivers Kormt and Ormt, and the two streams Kerlaug, to the trysting place.

Thor, who was honored as the highest god in Norway, came second in the trilogy of all the other countries, and was called “old Thor,” because he is supposed by some mythologists to have belonged to an older dynasty of gods, and not on account of his actual age, for he was represented and described as a man in his prime, tall and well formed, with muscular limbs and bristling red hair and beard, from which, in moments of anger, the sparks flew in showers.

“First, Thor with the bent brow,
In red beard muttering low,
Darting fierce lightnings from eyeballs that glow,
Comes, while each chariot wheel
Echoes in thunder peal,
As his dread hammer shock
Makes Earth and Heaven rock,
Clouds rifting above, while Earth quakes below.”

The Northern races further adorned him with a crown, on each point of which was either a glittering star, or a steadily burning flame, so that his head was ever surrounded by a kind of halo of fire, his own element.