Thoth – Scribe of the Gods 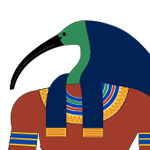 Thoth, in Egyptian Tchehuti or Tehuti, was the author of the texts that form the PER-T EM HRU, or Book of the Dead, and was believed by the Egyptians to have been the heart and mind of the Creator, who was in very early times in Egypt called by the natives “Pautti,” and by foreigners “Rā.” Thoth was also the “tongue” of the Creator, and he at all times voiced the will of the great god, and spoke the words which commanded every being and thing in heaven and in earth to come into existence. His words were almighty and once uttered never remained without effect. He framed the laws by which heaven, earth and all the heavenly bodies are maintained; he ordered the courses of the sun, moon, and stars; he invented drawing and design and the arts, the letters of the alphabet and the art of writing, and the science of mathematics. At a very early period he was called the “scribe (or secretary) of the Great Company of the Gods,” and as he kept the celestial register of the words and deeds of men, he was regarded by many generations of Egyptians as the “Recording Angel.” He was the inventor of physical and moral Law and became the personification of JUSTICE; and as the Companies of the Gods of Heaven, and Earth, and the Other World appointed him to “weigh the words and deeds” of men, and his verdicts were unalterable, he became more powerful in the Other World than Osiris himself. Osiris owed his triumph over Set in the Great Judgment Hall of the Gods entirely to the skill of Thoth of the “wise mouth” as an Advocate, and to his influence with the gods in heaven. And every follower of Osiris relied upon the advocacy of Thoth to secure his acquittal on the Day of Judgment, and to procure for him an everlasting habitation in the Kingdom of Osiris. 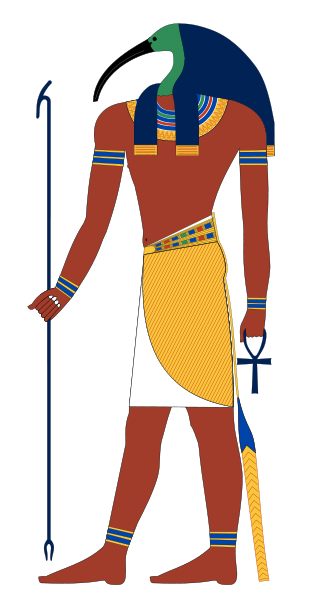 SOURCE: The Book of the Dead by E. A. Wallis Budge