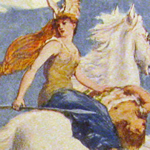 This palace, called Valhalla (the hall of the chosen slain), had five hundred and forty doors, wide enough to allow the passage of eight hundred warriors abreast, and above the principal gate were a boar’s head and an eagle whose piercing glance penetrated to the far corners of the world. The walls of this marvelous building were fashioned of glittering spears, so highly polished that they illuminated the hall. The roof was of golden shields, and the benches were decorated with fine armor, the god’s gifts to his guests. Here long tables afforded ample accommodation for the Einheriar, warriors fallen in battle, who were specially favoured by Odin.

“Easily to be known is,
By those who to Odin come,
The mansion by its aspect.
Its roof with spears is laid,
Its hall with shields is decked,
With corselets are its benches strewed.” 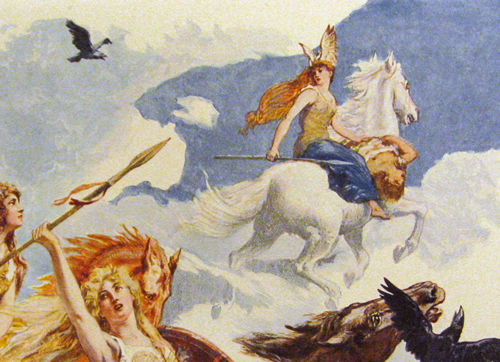 The ancient Northern nations, who deemed warfare the most honourable of occupations, and considered courage the greatest virtue, worshipped Odin principally as god of battle and victory. They believed that whenever a fight was impending he sent out his special attendants, the shield-, battle-, or wish-maidens, called Valkyrs (choosers of the slain), who selected from the dead warriors one-half of their number, whom they bore on their fleet steeds over the quivering rainbow bridge, Bifröst, into Valhalla. Welcomed by Odin’s sons, Hermod and Bragi, the heroes were conducted to the foot of Odin’s throne, where they received the praise due to their valour. When some special favourite of the god was thus brought into Asgard, Valfather (father of the slain), as Odin was called when he presided over the warriors, would sometimes rise from his throne and in person bid him welcome at the great entrance gate.